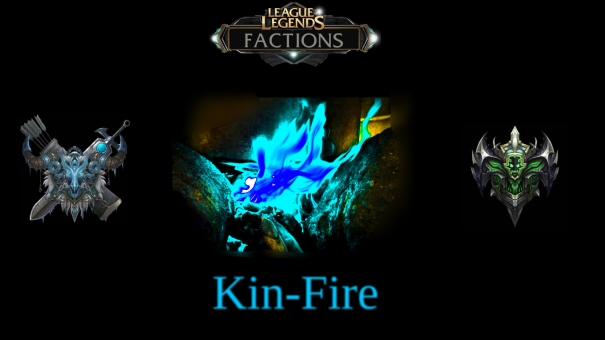 Long ago, a death-goddess called Anjalni would lead the worthiest of departed Freljordian souls back to the mortal world after their trek through the afterlife. But the First Rune War burned heaven and earth with spells of grotesque power, breaking the grip of the celestial pantheon on the corporeal plane. In her weakened state, Anjalni was struck down and banished by the runic blade of an ancient Champion whose soul she had sought to claim. Without her light to mark the end of their journeys, the dead were doomed to march forever through the gray lands of death. The forge-god Ornn, himself fading into legend, fired his furnace once more and declared that he would light their path. He fashioned a torch from Anjalni’s severed finger-bone, filled it to the brim with mournful kindling-prayers for the departed, and placed in its heart a tiny ember of dying god-flame. He blew upon it with his bellows, and from the torch blossomed the Kin-Fire. Its light dimmed as the Rune Wars devastated the land, but it was never quite extinguished.

Thousands of years later, the Rune Wars came to an end with the founding of the League of Legends. Divinity returned to Runeterra through a divinely-aligned nexus which formed in the Guardian’s Sea. (It was later built into the great Yordle Launch Pad that sent their Mothership on a celestial voyage.) The Kin-Fire, kept safe within the Ornnjhaln shrine in the western Freljord, began to brighten. When the Harrowing fell upon Runeterra that year, bringing the Black Winter of 26 CLE, the torch blazed as it had the day it was forged. Ghouls and wraiths came to consume its power, but Summoners of the League saved the Kin-Fire and the other treasures of the Ornnhjaln from the Black Winter, and raced them back to their ship, the Bright Revelation. They sailed out into the Mist. But they were never heard from again.

In October of 27 CLE, the next Harrowing began. The shamans and skalds of the Freljord were watchful, lest another Black Winter descend upon their land. They called on their ancestors to fight alongside them and drive the Ghoul back into the abyss. During their rituals, they saw something strange: a procession of ancestral spirits following the Kin-Fire out of the afterlife, only to find themselves mired in the gloom of the Shadow Isles. It was not long before Summoners confirmed that Karthus now held the Kin-Fire deep within the Shadow Isles, and was guiding Freljordian spirits out of the wearying cycle of death and rebirth into the still perfection of undeath.

The tribes of the Freljord demanded the return of the artifacts of the Ornnhjaln, which they claimed were taken through League interference. How, after all, was the Bright Revelation intercepted so easily while on a covert League mission? When Demacia waged its crusade against the Black Winter, it made a tacit pact with Noxus. While nothing that either faction was keen to discuss or even acknowledge in public, the essential terms were clear to any learned observer: Noxus assisted Demacia in reining in Zaun, and in exchange Demacia confined itself to ending the Black Winter, not investigating what part Noxus might have played in bringing it about. The Freljord, which suffered greatly in the Black Winter, claimed that the capture of the Bright Revelation was facilitated by corrupt Noxian Summoners under the sway of the Shadow Isles, and that Demacia (and the Council of the League) chose to look the other way for political reasons.

The Shadow Isles replied that, even if these accusations were true, the ship and its crew were taken on the open sea, depriving the Freljord of any clear right to the return of these artifacts. For too long, they said, the Kin-Fire had trapped these souls in a degrading cycle of wandering and confusion, living lives only to forget them on the voyage that followed. The powers of the Shadow Isles declared they would wield the Kin-Fire to end this torment.

The matter thus came before the League of Legends, final arbiter among nations. The Kin-Fire itself has been brought to the Institute of War, its flame hidden under a runic seal. Possession of the Kin-Fire, and of the other artifacts of Ornnhjaln, shall be adjudicated on the Fields of Justice.