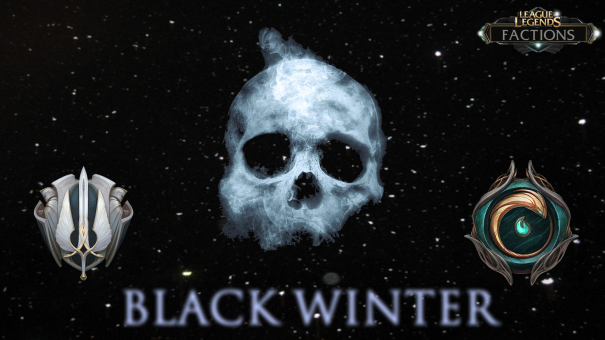 “Never before has the Black Mist spread so far into Valoran. Never have we seen a Harrowing like that of 26 CLE. But we are resolved that we will weather this dreadful storm, this black winter, and prove once more that the magic that threatened to destroy our world during the Rune Wars can be turned to her protection.”
—High Councilor Vessaria Kolminye, Harrow’s End Address of 24 November, 26 CLE

The formation of the Guardian’s Sea nexus restored divinity to Runeterra. There is a strong connection between the divine and the afterlife, and scholars wondered at what consequences this event might have on the coming Harrowing. Of particular concern was the resurgence of The Ghoul, a dark god of undeath from the Freljord’s primordial religion.

The coming of the Black Winter

In the Harrowing of 26 CLE, a blizzard from the Freljord and the Black Mist from Bilgewater coalesced at the Institute of War, plunging Runeterra into the so-called Black Winter. While Archsummoner Talik Lathner retained command over the multinational League relief force deployed to Bilgewater to combat the Mist, High Councilor Vessaria Kolminye did not attempt to expand that authority to cover the global Black Winter crisis. Rather, she released most of the Summoner corps back to the Summoners’ respective states, and each nation pursued its own solutions, with varying degrees of success. Bilgewater itself, though somewhat deprived of League assets, quickly received reinforcements from Noxus, and weathered the Mist much better than most regions. Noxus itself seemed significantly less affected by the Mist’s passage than elsewhere.

Demacia and Ionia overcome the crisis

Outside of Noxus, most nations struggled ineffectually against the Black Winter. As the traditional late-November date of Harrow’s End approached, however, Demacia and Ionia each declared victory. Demacia’s Lightbringer priesthood had banished the undead with holy incantations, and the monks of Ionia had summoned benign ancestral spirits who had come to a kind of peace with the troubled spirits brought by the Harrowing. Demacia preached purification, while Ionia lamented the neglect of the dead by cynical modern nations and held out the Black Winter as a warning.

It is customary for a member of the League’s Council to issue a celebratory speech on the date of Harrow’s End, when the cosmic forces realign to end the Harrowing. In 26 CLE, that date fell on November 24. Yet while the anticipated cosmic shift did take place on that date, the Black Winter showed no signs of weakening: indeed, it seemed to intensify, bringing several nations to the verge of collapse. The vengeful dead rose to attack the living, and death-plagues spread through the panicked population. A manablight similar to that observed in Bilgewater during the Mist compromising magic and hextech alike, weakening their effects and subjecting those who used them to necromantic contamination. The people of Valoran, often resentful and suspicious of the League, pleaded with their leaders to seek help from the Institute of War.

In 26 CLE, High Councilor Vessaria Kolminye herself delivered the Harrow’s End Address. Rather than the usual celebration of the end of the Harrowing, this speech was a measured acknowledgement of the present crisis. She concluded the speech by saying that delegates from each member-state were now at the Institute of War, and that she would be going from the podium directly to a meeting of these delegates with the purpose of developing a solution to the Black Winter.

Demacia and Ionia quickly took control of the summit, as they had each resolved the crisis in their own territories. (Noxus had also been successful, but its delegate reported that he was there merely to say Noxus would consider assenting to any solution that did not involve Demacian or Ionian activity within Shurima, Bilgewater, the Noxian settlement at Shon-Xan, or Noxus itself.) Demacia proposed a sweeping inquisition of Valoran, hunting down cults of necromancers and banishing the undead with holy magic. Ionia, meanwhile, protested that amplifying these “holy” forces would only produce a countervailing amplification of the “unholy”, and that a more patient, balanced solution involving the cultivation of relationships with the spirits of the departed was the best way forward.

No single compromise could be reached. Demacia accused Ionia of callous indifference to the plight of those threatened by the Black Winter. Ionia retorted that Demacia had failed to learn the painful lesson of the Void War, that extreme action provokes an extreme reaction. Other member-states seconded either Demacia or Ionia, with varying degrees of confidence.

On the morning of November 25, the Summoners of the League managed to wring a consensus out of the divided member-states. A League dispute would begin as of November 28. During that dispute, the member-states (other than Noxus and Zaun) would receive aid from Demacia and Ionia, subject to such agreements as they might make. If the Black Winter persisted at the end of that dispute on January 9, these states would agree to cooperate in the implementation of the prevailing faction’s plan to stabilize those regions still suffering from the Mist. There would certainly be negative effects on the losing faction, as the victorious faction’s method would be mutually exclusive with their own (Demacia sought to banish spirits, while Ionia proposed to increase the connection with the spirit world), but all agreed that a unified approach would ultimately be necessary.