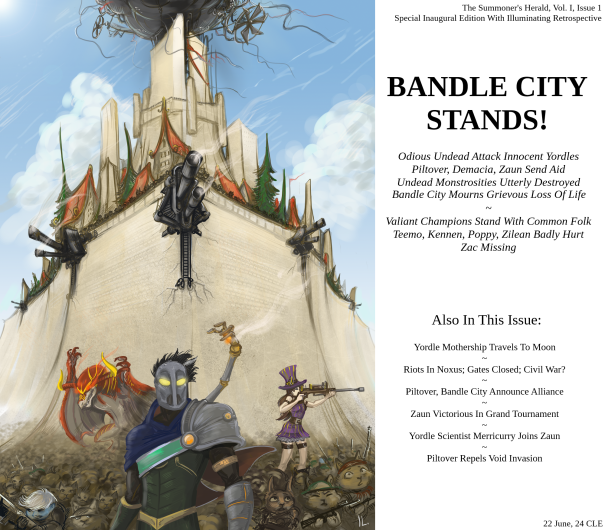 The Summoner’s Herald is the in-universe newspaper for Factions. Starting around the time of Black Winter, we have begun using it as our primary means of conveying key lore updates, as it does so more efficiently than narrative lore pieces.

The Summoner’s Herald was founded in June of 24 CLE. It is a newspaper sponsored by the Institute of War, aimed primarily at Summoners and scholars of the Institute. (It is becoming somewhat popular beyond the Institute, as well, for those who want to read about events beyond their homeland’s borders.) Its tone is alternately stuffy and sensationalist, but its editors and authors are a learned bunch writing for an erudite audience.

When writing for the Herald, think like a journalist. Your goal is to get people to read your papers. That doesn’t mean it needs to be dense, dry analysis; on the contrary, colorful detail is often more important than substance. (See: human interest stories.) In the Summoners’ Briefing (op-eds and such) section, you’re free to go totally loony and partisan, but otherwise you should remember that the Editors are unlikely to jeopardize the publication by trashing a powerful faction, and don’t want to turn off readers. When they moralize, it’s done in a soapboxy way that nobody would object to: VALIANT CHAMPIONS STAND WITH COMMON FOLK is quite normative but totally unobjectionable to most readers.

There is extra stylistic leeway in the “Valoranian News In Review” section, which contains articles “syndicated” from other (often national) papers. A Demacian piece is likely to sound like something a town crier might proclaim in the square, while a Zaunite piece can be irreverent and “modern”-sounding, and a Piltovian piece may evoke eccentric artistocrat-adventurers, walrus-mustaches and bluster, petticoats and parasols.

21 comments on “The Summoner’s Herald”