This edition of the Herald takes place just before the resolution of Lore Event II: The Festival of Might. It focuses on the recruitment of Blitzcrank and Riven.

Riven, called a prominent member of the Noxian Reformist movement by (it would seem) everyone save herself, has remained on the sidelines of the Qa’hhar conflict until now. Today, she came before the Council to make her oath, pledging all her strength to resisting the spread of Zaunite techmaturgy into Shurima. She thereupon traveled to Qa’hhar, where she met with Noxian Governor Sorinius Felk. The Governor has been suspected of having Reformist sympathies, and was sent from the capital under possibly less than voluntary circumstances after the failed revolution of 24 CLE. Also reportedly present was Ra’hum Jhi’marr, First Centurion of the Noxian Eighth Legion. Jhi’marr is a Shuriman warchief who fought against Noxus during the Shuriman War of Independence in 25 CLE, was captured, and subsequently was recruited as an officer commanding Shuriman auxiliaries.

Many within the orthodox Noxian establishment are still keeping their distance from Riven, who has not returned to Noxus itself since the war for Shon-Xan, instead leading Noxian refugees in Piltover. Riven has, however, publicly called upon Summoners for assistance in finding a way to reverse some of the damage done by the refinery explosion and other forms of Zaunite hextech. There has been some suggestion that she may combine her efforts with Jovainus Yorksinson, a mage in the Eighth Legion currently studying Qa’hharian ruins believed to date back to before the Scorching of Shurima. 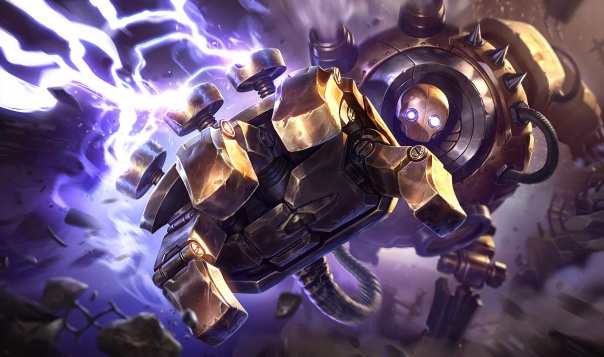 Zaun has received new reinforcements in its fight for Qa’hhar, in the form of the great steam golem called Blitzcrank. His entrance seems to have been arranged by Viktor. The Council of Zaun was responsible for recognizing Blitzcrank’s sapient status long ago, and sponsoring his admission to the League of Legends as a Champion.

Blitzcrank has announced he will be participating in the TeknoFest celebration sponsored by leading Zaunite megacorporations, to run in tandem with (and, many would say, in opposition to) the Noxian Festival of Might.

The New Herald is indeed a work of progress, and we would enjoy some questions and answers to facilitate engagement with our audience. For this reason, this section will be reserved for Letters to the Editor. I will do my best to publish your (succinct) contributions and clarify any questions that may arise.