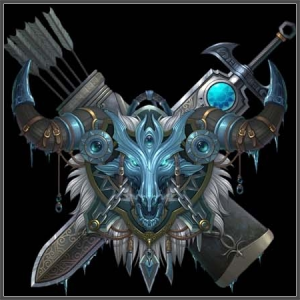 from The Right Weapon

The hateful eyes of the slain Demacian’s ghost faded away into the back of Mauro’s mind.

The walls of this room were carved with ice-blue Freljordian symbols, and there was snow on the ground.

The Keeper gestured to a bow on the wall, made of polished shiverwood, white and lustrous. The bowstring was braided, and upon closer inspection, the strands were hairs that somehow (Mauro presumed) could be drawn and stretched through magic.

“Avarosan bow. It’s…it was, anyway, a family heirloom. Twelve strands of hair, one from each generation to wield it. Not sure why the string is still so thin, but I have a funny feeling that magic might be involved, heh heh.”

Mauro looked it over. “What do you mean, was?”

The Keeper sobered somewhat. “It was inherited by an archer who died at Krocylea. It should have gone to his younger sister next, but, eh, she was there too. No one in the clan wanted it. So I made a trade through some associates.”

The Keeper led Mauro away. “A bow’s not really a self-defense weapon. Nice, though, eh?”

The bow yearned for a wielder. But it would be someone else.

“Now this here was forged by the Winter’s Claw just a couple years ago.” The Keeper handed Mauro a peculiar weapon. It was a hatchet, but with a swordlike basket handguard, clearly meant to be wielded in one fixed grip. Indeed, there were spikes on the haft; you couldn’t change your grip if you wanted to, unless you felt like securing your handhold by shoving one of those spikes through your palm.

Mauro opted for a more traditional grip. His hand fit snugly within the guard. One could probably keep this grip even with frostbitten fingers, and perhaps that was the point.

“Edged with mirrorwater steel,” the Keeper explained, rather proudly.

Mauro tried to give it a few weight-testing turns, but found that the cold had stiffened not only his fingers but his hand and wrist.

What do you know of hardship, Summoner? How would you ever survive the cold, when your spirit is merely embers?

It took Mauro some effort to unstick his fingers and extricate his hand from the weapon. While the Keeper replaced the weapon, he rubbed some heat back into his flesh.

“What about those?” Mauro nodded toward a beautiful pair of hook-daggers.

One appeared to be white, though as the Keeper took it down from the wall it flashed, and Mauro realized it was simply reflecting the snow so perfectly as to seem white itself. It had a double-edged blade, with a pointed spike hooking out from the hilt, either to catch an opponent’s weapon (or perhaps claws) or to fully embed itself once thrust in. Mauro could readily imagine a Frostguard warrior clinging on for dear life after sinking that dagger into the back of some lumbering snow-beast.

The other was a single spike carved of black True Ice. It was nearly twice as long as the first.

“These came to me from a captain of the Frostguard. Natural choice, maybe. You Summoners go up against monsters pretty often, right? Well. That’s what the Frostguard’s for. Hunting down monsters.”

The magic radiating from the daggers was elegantly subtle, but when he held them, he heard their whispers at once.

Where are your enemies?

Relinquish warmth. Kill the weakness inside you.

Find their weakness. Know it.

You will be cold, yet you shall burn.

Whom do you trust? Search their ranks.

You trust so blindly. Do you trust enemies, even now?

You yearn for home.

You will be betrayed and slain. We cannot save a blind fool.

Cold stung his hands. His skin was pale, and began to crack as he opened his grip to return the daggers to the Keeper.

Mauro cupped his hands and breathed into them. He rubbed them together until sensation returned.

“Let’s try something from someplace a bit warmer, eh?”