Against Apocalypse (Intro Snippet and Preview) 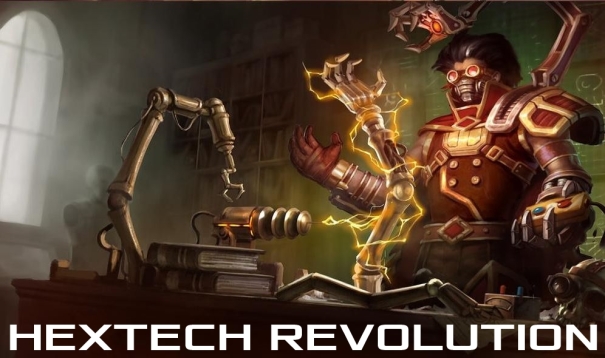 The lore that formally concludes the previous arc, Hextech Revolution, is nearly complete. I once again do apologize for the delay: this is the most that Factions lore has ever lagged, and I have no intention of letting it lag this much in the future. As I’ll discuss more later, we’re probably going to tack another month onto Nyroth, to compensate for the slow start.

In the meantime, here is the opening section of Update 11: Against Apocalypse. This lore update, like much of Factions lore, was built upon match outcomes relating to the Battle of Shurima.

On the plus side, this does provide an opportunity to recap the events of the previous storyline for newcomers. 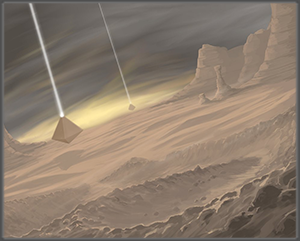 The curator notices you looking into an enchanted painting. It is entitled Against Apocalypse, and depicts a great battle between several Valoranian nations and the Void. Its most striking element is a chaotic sky slashed with angular cuts of marbled purple and black, filled with sinister yellow eyes gazing down on the desert. Seeing that you appear amenable to conversation, and taking note of your purple robes, she pushes her spectacles up onto the bridge of her nose and gestures to the painting.

“Ah, the Battle of Shurima of 24 CLE. A fateful day, to be sure. Presumably you’re acquainted with the events depicted, Summoner? It was during the Hextech Revolution: after the war in Shon-Xan, but before they discovered Nyroth and … well, you know how that went.”

In fact, you do. You’re old, much older than you look … and much older, obviously, than she realizes you are. But you say nothing as she continues.

“So, the Hextech Revolution. Void-touched dark sand — more properly pyrikhos — was found in Shurima, and that’s when it all started. Until that time, hextech was relatively rare. You needed an arcane focus to power the device, and most arcane foci are very finicky; you can’t just slap, say, a firegem into a hextech revolver in place of a hemophage’s fang and expect it to work! But pyrikhos … not only was there a ton of the stuff, but it was so incredibly versatile, almost like pure mana. Merricurry gave her talk at the Institute, you know the one that people always quote —”

She adopts an exaggerated scowl and mimics a booming male voice with a Demacian accent, “Madame Merricurry, you are insane!” She switches to a high-pitched tone and retorts, “I am Doctor Merricurry and I am RIGHT!” She smacks her fist into her palm at the right moment for dramatic effect.

She laughs, as do you; you saw the docudrama just a couple weeks ago. They always work that scene into those.

She continues. “And after her talk, people realized … you could build anything with this pyrikhos. On a mass-production scale. Can you imagine how tempting that was?”

Her eyes turn to the painting. Its magical pigments shimmer as though still wet. “Everyone got excited. Zaun. Piltover. Bandle City. Demacia wasn’t happy, but when it saw Zaun building the HexKorps — remember that until that time Zaun was pretty much just a zany sidekick to Noxus, not a world power — it decided that it needed Piltover to build something comparable, or else once Noxus recovered from Shon-Xan there was going to be a new world order under Noxus and Zaun. So it grudgingly went along, meanwhile desperately searching for a kind of holy kill-switch, a purification spell, that it could invoke if things got out of hand. Well, they did. Ceruleana, the ocean spirit — some people even called her a goddess back then; you know, the one with the Mirrorwater connection? — came bursting into Jarvan III’s castle hall and started raving that the world was about to end. She said that Zaun’s largest mine, Mine Six, had a Void rift forming inside of it. She said they had to destroy it immediately, by any means necessary, or it would break Runeterra apart and pull the fragments into the Void. This wasn’t just another Void War: it was an apocalypse on the horizon.”

She gestures to the depiction of Jarvan III atop his white pegasus, ordering the broken remnants of the Demacian army forward into a wall of Voidspawn rushing toward the mine. The aftermath of his fateful decision. “They say King Jarvan wasn’t sure what to do. Demacia was a founding member of the League, after all. This would be a direct violation of a League peace edict. The fallout could have destroyed the League. And this was just a prophecy: maybe she was wrong, maybe she was lying. So he spoke with his advisors, and with Demacia’s Summoners and Champions, for hours. At the end of it, he marched the army into Shurima.”

It’s almost as though the painting is listening, drinking up the words. A wave of dry heat radiates from its surface, and you catch the scent of Shuriman sand, laced with the stench of blood and the nauseating tang of Void magic.

“The Demacians demanded that Zaun let them use their holy magic to exorcise the mine and destroy the dark sand inside. Zaun wasn’t buying it. They thought they understood the Void, and up until that point the worst that had happened was the Void War: pretty awful, but no apocalypse. They weren’t even really buying that Demacia — Demacia — was going to start an illegal war over this crazy prophecy. But Jarvan gave the order to attack after all. So Zaun brought in Noxian reinforcements, Voidlings came pouring out of the mine, which probably should have been a hint that there really was something going on, and long story short the Demacian army was routed. That’s when Malzahar showed up, the sky went all purple and yellow, and everyone realized that Ceruleana had been right. So suddenly, what was left of Demacia’s army rallied and came charging back in, this time to fight alongside the Noxians and Zaunites who had slaughtered their comrades just minutes ago, and they all together made a truly desperate push to break into the mine, take down Malzahar, and, you know, save the world.”

She pauses, then laughs and gives a little bow. “Sorry, Summoner. It’s just one of my favorites. Ah, to have seen that day! Anyway, I do need to get going, but if you’d like to know more …” She runs her fingertip along a row of guidebooks, plucks one out, and flips it to a page somewhere near the middle. “There you are. An article written to accompany the painting. Enjoy! Just be careful … you can really get lost in there. The painting, I mean. The article’s good, too, but nobody’s ever gone nuts after drinking a whole case of ThaumaKola and staring at it for fifteen hours, like poor Summoner Yokozar.”

She bows again, then walks past you down the hall. The article she’s given you is titled—

Against Apocalypse, by Mizara of New Navori.

Ionian metaphysics and philosophy discuss many balances, but describe only one as truly fundamental. This is the cosmic balance between Order and Chaos, between Harmony and Discord, between the Word and the Howl. Mortal existence can only be sustained within a narrow range along this continuum; outside these bounds lie alien realities beyond our comprehension, whose merest shadows bring madness and death. Runeterra’s existence is but a reflection of one small point of self-asserting balance.

Demacia strained this balance when it invoked the power of the ocean spirit Ceruleana to impose Order upon Valoran with its fleet. It soon snapped back into equilibrium, and the shock split the cursed sands of Icathia apart. From this rift Malzahar called forth the demons of the Void, who trampled the currents of life and death as they rushed out; a dark alliance of Discord was formed as Karthus next roused the tortured dead to drag the living into their disturbed graves. Valoran’s combined strength broke Discord’s onslaught at the gates of Noxus, but still the Icathian wound bled. Its vile ichor seeped out and poisoned much Noxian land; the starving masses fled to Ionia, and Discord rejoiced as fresh blood was spilled in a new war between these old enemies.

In 24 CLE, the Void’s contamination reached Shurima, then merely ruins where a proud civilization of arcane wisdom most refined had once stood. The effects in Shurima were different than they had been in Noxus: the Void ooze mixed with the forgotten enchantments that still haunted the Shuriman ruins, creating vast seams of purple sand charged with arcane power. This “dark sand”, called “pyrikhos” in Shuriman, proved a versatile and abundant hextech energy source which made the mass production of hextech devices possible and fueled the so-called Hextech Revolution. The theoretical breakthroughs that enabled this revolution, most notably the brilliant discoveries of yordle scientist Merricurry, re-cast the Void as simply a new source of power posing acceptable levels of risk — provided that suitable precautions were taken.

Demacia, long fearful that no such precautions would suffice, chose to act when Ceruleana appeared before them with a dire prophecy. She told of a new Void rift opening within one of Zaun’s largest dark sand mines, which if not sealed shut would soon devour all of Runeterra. She insisted that Runeterra’s only hope was the immediate destruction of the mine, and the neutralization of the Void-touched dark sand within. Reluctant to violate the laws of the League, King Jarvan III nonetheless ordered Demacia’s armies forth. In the battle that followed,  Zaun and its ally Noxus defeated the combined forces of Demacia, Piltover, and Bandle City with much loss of life. No sooner had Demacia been driven into retreat than Malzahar appeared to proclaim that Runeterra’s time had come at last. The slaughter of the Demacian wounded stopped as all turned to see the stars vanish, replaced with the blinking yellow eyes of ravenous beasts from beyond.

The apocalypse had begun, as Ceruleana had foretold. These five nations of Valoran — Zaun, Noxus, Demacia, Piltover, and Bandle City — banded together in a desperate assault upon the mine. As their armies held the flanks, these nations’ Champions stormed the mine to defeat Malzahar and close the rift, praying that it was not already too late.

Your eyes catch a strange glimmer from the painting. You look up from the page and find your eyes fixed upon the figure of Viktor, the Machine Herald, taking cover from the Void onslaught just outside the mine.

You taste copper and electricity.
The booklet falls from your hand.
You stand beneath a purple and yellow sky and feel the world coming apart.

One comment on “Against Apocalypse (Intro Snippet and Preview)”