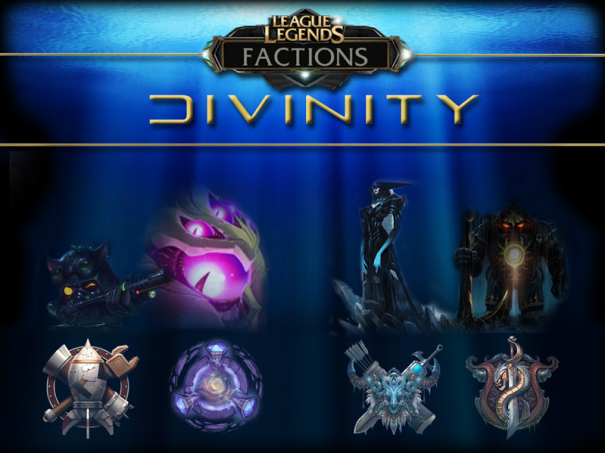 The following Champions were recruited to the four factions this past Thursday. Thanks to AbiwonKenabi, Jondor Horoku, and ShadowKnight1224 for help with these lore tidbits. 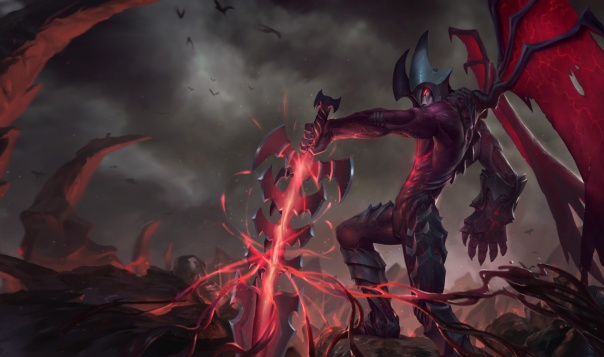 Aatrox, the Darkin Blade, has declared for Icathia. Aatrox is an avatar of otherworldly power, and a shaper of destiny. To armies on the brink of defeat, he is the spirit of impossible victory suddenly within their grasp. To their adversaries, he is a demonic force that can transform a broken band of weary soldiers into fanatics who fight to the last with the strength of the enraged and the inspired. He is a renewer of war, and a corruptor of souls. The source of his power is unknown, but mages believe that his power is more in the nature of divine or cosmic energy than elemental energy. And over millennia of legends and scripture, he has himself come to be viewed as a kind of god, or demon. Those ancient stories were proven to be more than stories when Discord overcame Valoran, and again when he led the necromancers of the Shadow Isles on a rampage across Nyroth.

Aatrox comes now to Icathia, as it seeks to restore Uun’Zek’Nare and reach out to the stars. The fragmented accounts of the battle that destroyed the spire-city do make mention of supernatural beings, and some see Aatrox in the “winged reaper” that decimated the Magelord fleet, or the “knight of ruin” who made a foothold for Magelord landing parties by smiting a “great Void-serpent” on the jagged coast. Whether or not he was present, the Rune Wars that drove away Runeterra’s gods and warped its landscape were his playground. Some fear why such a being would wish to resurrect a city besieged by Magelords… 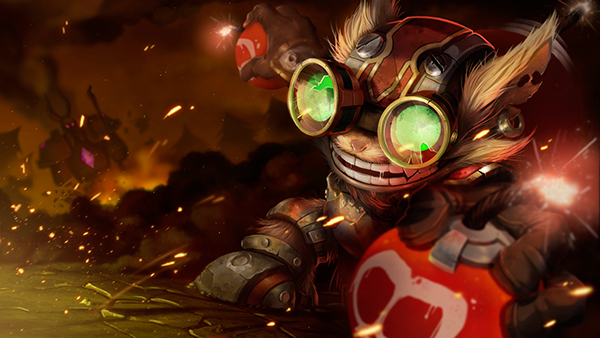 Ziggs, the Hexplosives Expert, has declared for Bandle City. Ziggs is usually found in Piltover, practicing his explosive craft at the Yordle Academy, where he holds the real, actual, it’s-seriously-written-on-his-office-door title of Dean of Demolitions. Still, all yordles have a special place in their heart for their beloved Bandle City. So, too, with Ziggs…although even the residents of Bandle City get nervous around him, because they know that that “special place” in Ziggs’ heart is right next to the place for his Mega Inferno Bomb. (After one particularly “memorable” Starlight Festival, a certain Bandle City official spent three days saying absolutely nothing but mumbled variations on, “No fireworks next year.”) Yordles are not by nature a martial people, nor much interested in terraforming, and so Ziggs’ talents went somewhat unappreciated until the Hextech Revolution. Not only did he develop pyrikhos-based explosive ammunition for the Friendship Guns that helped save them from a lich queen’s undead hordes, but he played a key role in concocting the ultra-explosive pyrikhosian fuel that propelled the Mothership to the moon, fulfilling thousands of years of fervent yordle wishing.

During that same Hextech Revolution, Ziggs assisted in the design and construction of yordle mini-subs, meant to help find the lost Atlantean civilization. He developed underwater explosives, and fitted them into the warheads of minisub torpedoes. In one harrowing encounter, these torpedoes proved powerful enough to stun an abyssal sea monster so that the sub could make an escape. Ziggs would like to see if he can do a little better than that. And then there are all these rocky underwater caverns to “open for exploration”…something Ziggs is quite confident he can accomplish. 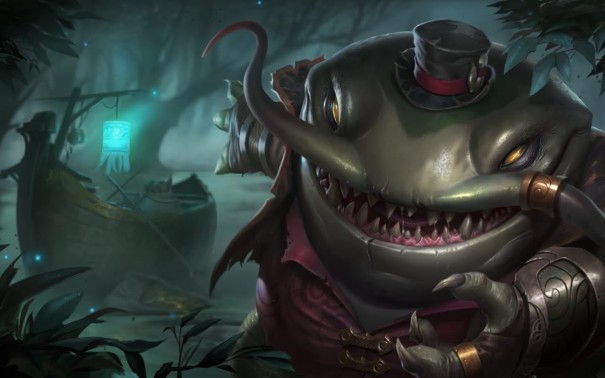 Tahm Kench, the River King, has declared for Bilgewater. The River King’s sweet words will lure you in, but a deal with Tahm Kench almost always ends in tragedy. Throughout Bilgewater, the legend of the demon with two coats is well-known, a fiendish charmer who has taken many a desperate vagabond on his Abyssal Voyage. And in 25 CLE, he brought his prodigious faculties for dealmaking, and his insatiable desire to strike the next bargain, to the Institute of War, overflowing with the ambition of Summoners and Champions.

And though for many years he played the buffoon, the Champion called Gangplank was ambitious indeed. It is perhaps not a coincidence that not long after Tahm Kench entered the League, Gangplank gathered together the favors and influence he’d accumulated in the League and returned to Bilgewater to proclaim himself Reaver King. Tahm Kench was at his side on the Fields when he won control over the Slaughter Docks and secured his title.

Gangplank has once again called on the River King. Witnesses saw the two board Gangplank’s flagship and enter the captain’s cabin, where they held their negotiations in isolation, while Summoners and others looked on. (Few would risk being alone with the ravenous Tahm Kench, but Gangplank has never shied from danger.) Just after the sun set, the door opened, and Tahm Kench’s toothy grin was the first sight to emerge. As his gleaming eyes searched the crowds, he spoke as though greeting old friends. “My most convivial felicitations to this august feast of faces: eminent denizens of Bilgewater, and distinguished Summoners. I shall relate the cause of my exuberance: our lengthy discourse has come to concordance at last. Joyously do I anticipate the innumerable pleasures of counting as colleagues such talented wielders of the exquisite art of Summoning.” 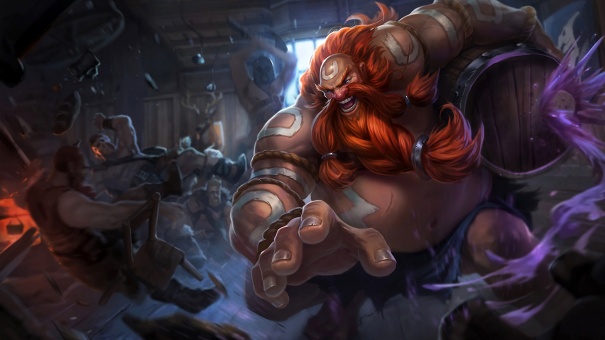 Gragas, the Rabble Rouser, has declared for Freljord. Although Gragas is renowned for being a practical man, given to the simple pleasures in life over the lofty ideals of spirituality, he values the culture of the Freljord rather highly. Drinking with someone, getting into a fight, then drinking with them once more: these are but some of the Freljord’s holiest traditions in his eyes.

It is no wonder, then, that when Ashe approached him, speaking of recapturing the values of the Freljord, of cherishing what made Freljordians unique, Gragas agreed to join her in this venture. In fact, the Rabble Rouser claimed that he’d support anything that would get the political leaders of the Freljord to either solve their differences with good old-fashioned fisticuffs, or simply sit and drink their problems away.