Week 13 of Divinity concluded with the August 20–21 Featured Matches.

Summoners and Champions from Bandle City and the Freljord jointly attended a symposium about Argyrian education. It was a tense situation, but the abundance of mead and juice boxes soon relaxed the attendees. Rather too much, as it happens. A number of agreements were drafted and signed over the remainder of the evening…but this left a lot of loose ends to tidy up on the Fields.

Each win gives +1 to the faction’s next Influence check on a Quest.

End result: The Freljord gets +3 to its next Quest Influence check.

On a warm night, with not a star in the sky, the game continued. It had been a long time, but at last the board had been carefully put back together the way it was before the great commotion had overturned it. Before the pieces had toppled the players…

Slender fingers slid a deck of gilt-edged cards into a sharp stack of tidy edges. And then one green-painted fingernail tapped the top card, bumping it out of alignment. With a flourish, the hand spun the top card off the stack, and flicked it down to the table.

“A long time now—setting it up.”

“Jax and Aatrox—not just a diversion.”

“Oh, them,” the woman answered lightly, as though reminded of old friends. “I wonder how they’re holding up.”

The other voice sank into a growl.

Lady Luck’s silver eyes shone, rising from the board to gaze upon her eternal opponent.

She placed three life-cards into a small stack, face down, and offered them.

“Aren’t you the least bit curious? Go on. Take one. Start something new. Surprise me.”

Jad’Vek answered with a low hiss. She flicked the tiny black ship over with a snap of a tendril-finger. The life cards seemed to turn suddenly heavy, and Lady Luck’s hands fell, dropping them to the table.

“Very well, but not him,” Lady Luck said, extending a delicate hand to draw one of her figures, a purple-robed Summoner, back from the “wrecked” ship.

Jad’Vek stopped her with a hiss. “We will see.” She turned another eye on her opponent, fixing her with a seventh glare.

Lady Luck froze her hand just above the figure. She nodded.

Jad’Vek spun two steel dice from a barbed tentacle. They whirled freely through the air, but struck the board with infinite weight, instantly fixed to its surface.

Each bore one word on its top face.

Lady Luck smiled, faintly, and toppled the figure beside the overturned ship.

The loss with all hands of the Bilgewater ship In the Black, which was carrying both an Icathian delegation and League observers, has provoked a storm of controversy at the Institute of War. In particular, the death of Archsummoner Vemlo Brance has allowed certain of his private affairs to become public. On this new evidence, it is believed that several parties not officially permitted to involve themselves in this dispute have indeed been meddling in the events surrounding the Guardian’s Sea nexus, with the Council’s support.

The winner of these matches will gain +d3 on their next Quest check, or +d6 if they go 3-0.

End result: Bilgewater gets +d3 on its next Quest check.

My apologies for the late post; we were discussing the schedule for the rest of the arc which delayed some final decisions on the featureds this week.

We have a lore event week here, and for Bandle City vs Freljord they drew an influence event. They’re going to be competing in an event focusing on their abilities to influence other factions and the League. In the Icathia vs Bilgewater matchup, the wheel of fortune was drawn; this means lady luck is going to be playing a role in how the games are played. And should lead to some kind of fancy lore event as well. We shall be rolling dice before each game, and they will determine each faction getting certain buffs or nerfs for that game. I would like to give out the list of those nerfs and buffs, but it’s not quite finalized and don’t want to give out stuff that might change.

So, with it now being known that dice rolls will have a large impact, I know what you’re all thinking… 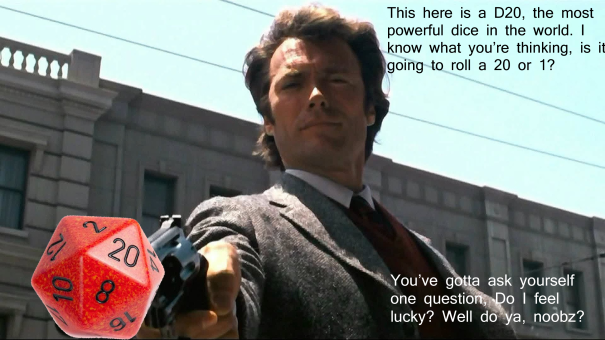