Discord Update 2: The Battle for Noxus

The Battle for Noxus

Driven by his consuming rage, Varus has betrayed Ionia and the other mortal nations of Valoran. He has declared for the forces of Discord as they battle in the League of Legends for the “right” to destroy Noxus.

Varus loosed a torrent of arrows and splattered the stones surrounding the Bandle City Nexus in blood.

“QUADRA KILL!” exclaimed an astonished Summoner. Her voice, empowered by a megavox enchantment, echoed through the arena.

Minions surged forward and battered the crystalline facade with their crude weapons. Varus turned, saw a fissure in the crystal, swept back his bow, and drove an arrowhead through the thin gap. 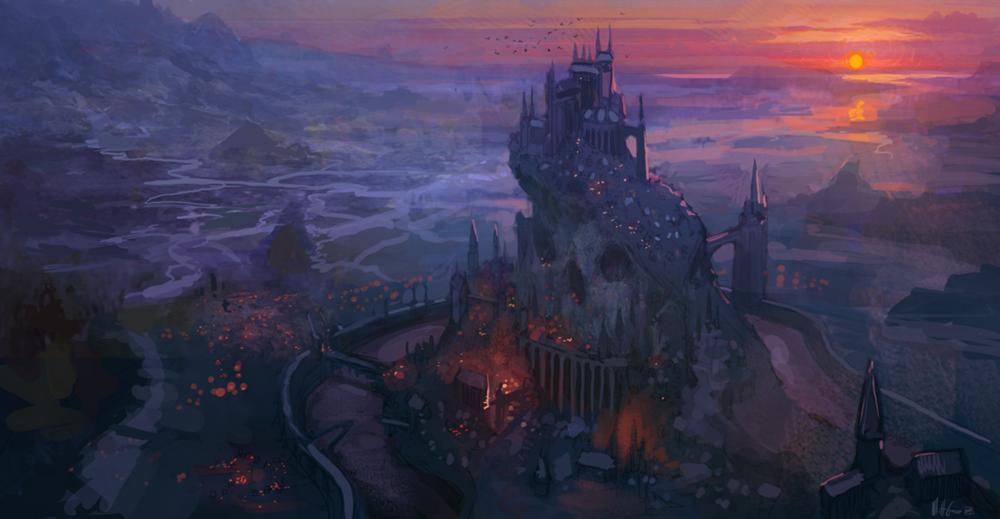 The tournament concluded, the Void begins to swarm Noxus. The High Command gathers to array its final defense against the onslaught, but prospects are grim.

Swain struck the map with his cane.

“Your regiment will hold here under a stealth enchantment. When their flank is exposed, you will launch a surprise assault.”

The regimental captain inclined her head. “What if their back ranks collapse on us?”

Swain scowled. “Then I’ll morph into a giant bird and EAT them!”

Beatrice squawked. He fed her a little morsel.

Beyond the city walls, the earth of the Noxian military’s vast graveyards churned. The countless dead of its centuries of warfare clawed up from the black soil and staggered forward.

Thresh stood behind this army of damned souls. He sensed their trepidation at leaving the cold earth in which they had so long slumbered. He cracked his flail over their ranks, and jagged bolts of ether flashed forth. They lurched and howled, grimy eye sockets blazing white with balefire. Clatters rose from the graveyard as their bony fingers gripped their weapons. The ferocity and hatred they had channeled through their blades in life washed back through them, driving them onward. Thresh laughed with delight.

Malzahar ascended to view the battlefield from above. In his malefic visions he saw through the walls of Noxus, through its defenders, through the present instant, to the future when all this would be smoldering ruins and desolation.

Beneath him, thousands of voidlings skittered forward alongside Thresh’s skeletal regiment. He drew his sword and pointed it across the ramparts.

Malzahar’s ultimatum echoed through the city streets, words laced with flashes of dark prophecy. The city’s fear was the final ingredient of an Icathian hex, buried for centuries, which had once crumbled walls and turned mighty fortresses into demon-haunted crypts.

An indigo mist began to creep up from the ground, draining the air itself of its fluid vitality. The parched atmosphere shimmered as it stretched tight. The Noxians began to choke; above them, the sky screamed and burst like dry skin, opening a purple gash that bled buzzing hordes of many-eyed monstrosities.

Reality sickened and faded. Noxus itself was being pulled into the Void.

Darius turned to the archmage behind him as the deadly magic spread. “Counterspell!”

The archmage hastily beckoned for the channeling crystal. An apprentice rushed to him, bearing an ebony box inscribed with the gauntleted fist emblem of Noxus.

The false floor of the box flipped up, and a jester’s face sprung out. Its grinning visage spewed burning venom over the archmage’s face; he fell back screaming, his magic of no use as his flesh began to melt away.

The apprentice threw back his hood. The bells of his jester’s cap jangled merrily as the fumes rose from the archmage’s writhing body.

Shaco split in two and dove down at his prey to finish the job, four daggers glinting as bright as the teeth that shone through his demonic grin.

Katarina appeared standing over the fallen mage. She deftly parried both sets of Shaco’s knives and struck one of the demon jesters through the neck. He let out a melodramatic death cry and burst into ribbons. She snapped her head to look over her other shoulder.

The real Shaco vanished in a puff of smoke and reappeared on a rooftop. Katarina flashed after him, and they renewed their battle high above the main street as the Noxian mages struggled to revive their leader and force back the Void’s ethereal encroachment.

Just then, a diminutive figure in silver and blue armor leapt through the sky, born aloft on a gust of wind, and for a moment was suspended in mid-air over the Noxian battlements.

A most unexpected cry followed.

Lux cast forth a brilliant rainbow of light, incinerating the first wave of monsters spilling forth from the gash in the sky. The purple mists began to fade as she landed on the stone wall and Galio rose up to hover above her. The stony guardian glowered down at the stunned Noxian archers. One coughed and lowered her bow. “Uh, yeah, Demacia!” She smiled hastily and stepped back from the looming gargoyle and his blonde associate, who frowned skeptically back at her.

Galio descended, landing with his talons gripping the ramparts. His wings swung out with a boom like beaten drums, and he bellowed a command to the soldiers beneath him, Noxians and Demacians alike.

Demacian men-at-arms, chastened by their Champion’s command, rushed forth to take up their defensive positions. A marshal blew a horn four times, twice long and twice short. At his signal, the men-at-arms drove the hafts of their spears into the soggy earth, forming an improvised spike-wall, and took one-handed warhammers from their belts. Their faces were plated in silver, etched with holy sigils by Demacian priests, blessed to smash the shambling bones of the restless dead.

Lux called down from above. “We can do this!”

Her encouragement was shortly followed by a volley of gunfire from Piltovian riflemen, taking up a flank position. Their gunshots blasted skeletons into bone dust. She glanced down behind the walls, and glimpsed the ribbony figure of a Void demon emerging from some dark temple—just in time to see a spread of shuriken slash it apart as Kennen revealed himself from the shadows.

The undead were nearly upon them. Neither boiling oil nor arrows would be of use against walking bones.

Darius hefted his axe and thrust it forward. At his signal, the massive city gates swung open and his finest warriors charged through to meet the onslaught.

The Battle for Noxus had begun.

Discord won a new Champion by winning the August 10–11 tournament. I polled the members of the winning Discord teams, and Shaco was the lead choice.

One comment on “Discord Update 2: The Battle for Noxus”