Previous Update: Driving Back the Shadows 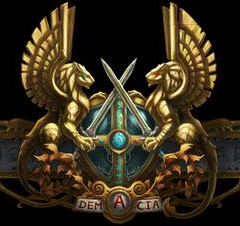 Leona strode into the courtyard, resplendent in her burnished armor. Her broadsword was sheathed at her hip, and in her hand she held a scroll bearing the royal seal of Demacia: a formal request directly from Prince Jarvan IV requesting her aid in the Ceruleana dispute.

“The Solari send aid to their mighty ally Prince Jarvan IV.” Leona held out the scroll. Jarvan took it with a duly respectful nod and unrolled the thick parchment. Leona’s signature flashed brilliantly on the page, beside an avian seal that gleamed like ever-molten gold of the purest grade.

Leona drew her sword and raised it high. The sun danced along the blade. “The struggle is over. The dawn has arrived.”

Leona, the Radiant Dawn, will fight for Demacia!

Demacia came in second place in the tournament; although it was tied with Freljord and Ionia in number of wins, it beat them both in their matches together.

Demacia has not gotten much love roster-wise, in part because it already has a fun teamfight-focused roster of Champions who yell DEMACIA a lot.

Leona does not yell Demacia, but she fits in great with Demacia’s all-in teamcomp. Her in-game feel (shiny golden plate armor and all) blends well with Demacia’s theme.

Lore: Leona comes from a martial civilization of strict rules and adherence to order. Natural allies of Demacia.

Gameplay: A more aggressive all-in tanky support for Demacian teams who want to crank their teamfight strategy up to 11.

Jayce grinned back at the towering hulk of shiny green goo. “We’ll do whatever we can to help. I know several reform-minded Zaunite scientists personally. You have my word I’ll pursue every reasonable avenue.”

Zac crossed his bulbous arms and rubbed his jack-o-lantern “chin”. He looked like some kind of grinning demon and glowed toxic green light that tinged the entire room. People were frequently surprised by his voice: garrulous, friendly, mellow … wholesome even.

Jayce paused briefly, then swung his arm out and clasped Zac’s palm. They shook.

Zac, the Secret Weapon, will fight for Piltover!

Lore: Zac wants to help clean up Zaun and promote the responsible use of technology.

Theme: He has a weird science thing going on. Obviously, this is more Zaunite, but it’s not too out of place on Piltover.

Gameplay: Finally, Vi doesn’t have to jungle every game.

The next storyline begins with: Discord