by CupcakeTrap (lore consult by Trismegistre)

“A trickster illusionist in heels and a little girl with a stuffed bear. But what could I possibly add to such an impressive circle of sorcerers.”

Morgana slid a batch of cupcakes into the oven. It sounded like something had just started to scream when she shut the metal door.

With her back still turned to Katarina, she pressed her palm to the oven to feel the delicious warmth soaking through. She watched the carved runes begin to glow. She savored it for a few moments, savoring also the Noxian errand-girl’s silence, the implication that even the arrogant daughter of DuCouteau had to show some measure of deference. Noxus needed her help badly. She would expect most generous payment.

She spoke again. “Do you come seeking charity? Or can you afford my fee even after you’ve bought dear Annie all the candies and chocolates she can eat?”

She looked back over the crest of her wings, and saw Katarina’s tense frown. Her tense, silent frown. She approached the counter between them with an easy smile, pausing along the way to set her flour-dusted mitts on a table. “I am at times charitable. There’s a little boy at the school down the road. I give him a free snack every time he comes by, and tell him a nice story while he eats.”

Morgana was impressed by the agility of Katarina’s psyche, deftly evading the embrace of her gaze even as she drew closer. But soon she erred, and Morgana’s eyes glowed as she snared the girl’s mortal soul and spoke straight through her flesh to the essence of her being.

“Perhaps he’ll carve your heart out, one day, when you’re old and feeble.”

The little morsel of fear she gnawed from the seemingly dauntless assassin was most delectable, though she could not longer maintain her hold. Back to business.

She tapped the counter. “Go on. Show me. And remember your manners, young mistress of House DuCouteau.”

Katarina, having not yet regained her icy composure, slapped a contract down. “The High Command has seen fit to extend you this offer. Read it and give me your answer.” She shoved it forward with a scratch-hiss of thick parchment over rough iron. “It’s considerably more generous than our usual terms. That’s all the flattery you’ll get from me, witch.”

Morgana sneered at this flimsy, disposable, shortsighted creature. “You are gravely mistaken to address me so.” She leaned closer. “A witch is someone who prays to things like me.”

She rose back to her full height. As her shoulders rolled back, her wings fanned, then fell. “As for our ‘usual’ terms, do not pretend this is a routine engagement. I know how dearly your masters want the mirrorwater.” She searched Katarina’s aura for a trace of the psychic wound she’d inflicted earlier. Just a little scratch, but there it was, and still fresh. She enveloped her within her dread gaze, inside this shop whose hidden runes she’d carved herself, and let Katarina’s fear bleed out.

“Mmmm. They wish it dearly, and fearfully. Mighty Noxus fears that it will lose. That Demacia will get it instead. You’ve been naughty, and you’re afraid Jarvan will come and box your little ears, clip your new Grand General’s wings.”

Katarina narrowed her eyes. She pushed back, with truly remarkable force, and Morgana released the thrashing child with a smile.

She clicked her tongue. “Look at you. Noxus. Demacia. Pouty little mortals bickering over a shiny puddle. As though you had any idea what it was.”

Katarina did not ask. The hatred—and the fear, Morgana noted with great pleasure—seethed through her. “Stay out of my head, demon. Or else you may find, when I slice you open, that you’re more mortal than you think.”

Morgana smiled all the brighter. “How fearsome you could be, Katarina, if you only learned to hate properly.”

Katarina met Morgana’s gaze, and disappointed her, by simply regaining her composure and brushing her off with another clever quip. “My sister pushed me out of a tree when I was little. I broke my arm. I’ve gotten over it. I suggest you do the same.” Hollow sarcasm from a hollow mortal, already crumbling to dust. Graceful, clever, determined—but hollow.

Katarina gestured to the contract. “The High Command requests your prompt reply.”

Morgana began to read. Katarina no longer holding her interest, she dipped a finger into the mixing bowl beside her and had a taste of the raw batter. She skimmed past the ornamental preliminaries to the menu that followed.

The appetizer was rather conventional—black iron forged in the last lifeblood of tortured prisoners, arcanically charged by contact with their departing souls. Noxian spellforged black iron was a guilty pleasure of hers, and one of the most wickedly innovative creations of these Runeterrans, but the truth was that their pretensions of black magic far exceeded their true capability. She’d used some for one of her favorite baking trays.

Gold was the first course, bland but in generous portions. It soon became more interesting: these Noxians had always been rather timorous when it came to magic, but it seemed this Jericho Swain was willing to do away with some of Darkwill’s stodgier restrictions. Extraplanar summonings would remain forbidden, but with these changes, Morgana could devise a few ways to consult with her more remote associates from time to time. And then the spellbooks and wands from their archives—a few titles from the hidden arcana of the Collegium Calavanica. Now there was an order of Noxian mages whose talents and convictions were both rather exceptional. She’d adopted more than one clever, dirty trick of theirs into her arsenal. Kayle was always so easily surprised by the combination of angelic power and mortal deviousness. Morgana took another taste of batter as her hunger for a main course grew.

Morgana did not bother to hide her surprise when she saw, among the terms, temporary access to a fractured nexus in the Voodoo Lands. The League had proved uncommonly stubborn about that nexus, no matter how viciously she pried. Darkwill never would have helped her, not for all the life-extending elixirs she could brew. His own Summoners were utterly incapable of crafting a spell that could refract through that broken glass and pierce into the heart of Runeterra, and he took that as a sign that it was something Not To Be Done. The coward. Death had found him in the end, for all his trembling. But this Swain, he seemed more…imaginative. Morgana would see that he was rewarded.

But she frowned to see that it was a contingency fee, dependent upon their victory on the Fields. Her appetite spoiled, she barely reacted to the closing offers of “collaboration” or “inspection” of the Mirrorwater.

Still, a tolerable proposal, all in all. She brushed a fingertip down the page, pausing at the High Command’s seal, stamped in crimson.

“Very well. If only to spare you the lashing you’ll get if you scamper back empty-handed.” She waved her hand, and conjured her signature onto the page. She folded the parchment and pressed its edge into Katarina’s palm. “Noxian sorcery is a fine vintage. I look forward to receiving what you’ve promised me.”

Katarina nodded. “Read faster next time,” she said, hollowly, and turned to leave.

Morgana waited for her to take her first step toward the door before interjecting. “Before you go.”

Katarina looked back. Morgana slid open the glass display case below the counter and took out a square of fudge, lavished with thick strokes of red and purple frosting, resting on a ceramic plate. She held it out.

“A little snack. You’re skin and bones, dear.” She smiled, and gazed through her. “Skin and bones.”

Morgana, the Fallen Angel, has declared for Noxus!

Morgana fits thematically with Noxus, and offers them an interesting support option. She also has a decent story connection, given her canonical residence within Noxus. Because if you’re going to make cupcakes sweetened with the screams of the damned, Noxus is probably the place to do it. 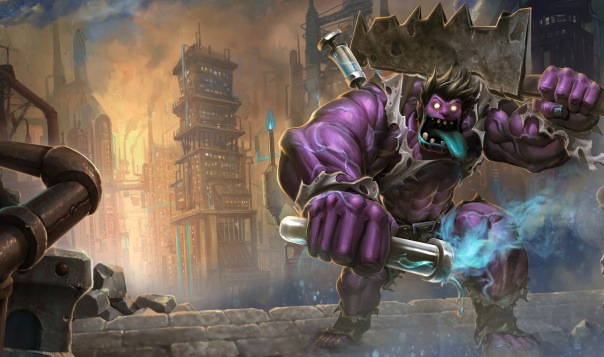 “By the authority of the Council, let this adjudication begin. On petition by Noxus, now comes before us a Champion of the League of Legends in…good…standing, who seeks admittance to—”

Mundo’s serrated cleaver sank into the ancient, enchanted wood of the podium. Something gray, green, and altogether horrible oozed out from between the wood and the rusty metal. An interaction between the techmaturgical compounds applied to the cleaver and the rather more dignified magics that enchanted the podium spat ethereal sparks.

The Summoners scrambled for the appropriate scrolls and spilled magical binding ink in their haste to wet the quills.

Mundo clamped a fist around the handle of his cleaver and yanked it free. Some of that hideous ichor splattered the scribe’s desk.

The Summoners were writing. Mundo ground his teeth suspiciously in big jowly gyrations. He tapped his foot, and slightly out of time with that he thwacked his cleaver into his palm like it was a ruler being readied to slap some knuckles. Quite unlike a ruler, with each thwack it drove into his flesh. Chemical-tinged blood dripped along the cleaver’s edge and puddled on the floor.

The other Summoner elbowed the first. Was she trying to get another cleaver thrown at them?

“Mundo want to be certain of Mundo’s answer.”

The Summoners made nary a peep.

” … Mundo … ” he murmured pensively. It was unclear whether this was noun, adjective, or verb. But the Summoner scribe began to write.

The quill froze. Mundo used his name for a wide variety of linguistic purposes. That one was definitely a verb. An imperative verb, meaning ‘stop’.

The quill moved again. It completed its shaky transit across the page uninterrupted.

“Be it recognized that Dr. Mundo has declared allegiance to Noxus in the Mirrorwater dispute.”

Dr. Mundo, the Madman of Zaun, has declared for Noxus!

Mundo has a strong lore history of fighting for Noxus. He also represents their closeness with Zaun. Thematically, while he’s a bit goofier than the average Noxian, thunking jagged metal cleavers into the flesh of one’s enemies is something even the most conservative Noxian can appreciate.

Next Update — The Freljord Resolution