Some of our colleagues have expressed surprise that the advent of the Black Winter was accompanied by only short rush-releases from the Herald. We regret that, until today, we were not at liberty to resolve this confusion, which was surely increased by the publication on 11 December, 27 CLE of a “second” issue of Volume V of our periodical. We have now received permission from the Council to clarify that this issue was placed on hold by that same body for reasons of security. It is now being published with only a few alterations.

For purposes of continuity, the originally intended publication date of 1 December, 27 CLE is preserved above.

The Harrowing is Upon Us!

Summoners Caius “PONCHOGRANDE” Bannon and Quin “Sodaman64” Stewardson have reported a massive surge of Mist-inspired activity along the waterfronts of Bilgewater. Similar reports have sprung up from Summoners in the Frostguard citadel, including Synar “CrazedPorcupine” Celimdha, who has relayed readings of “unprecedented” Mist activity. 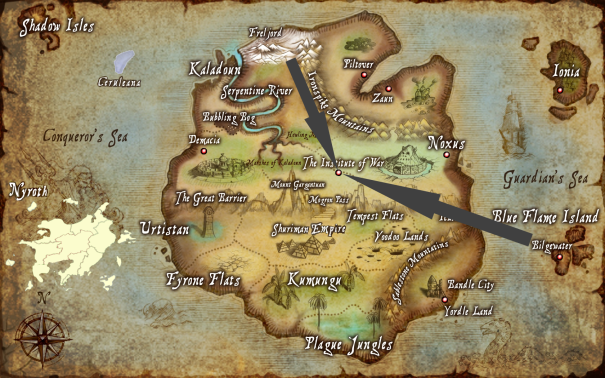 Typically, the Black Mist is centered on Bilgewater. This year, however, the Mist shot through Bilgewater and into the Valoranian mainland. Almost simultaneously, a blizzard descended from the Freljord to meet the Mist at the Institute, enveloping it in a necromantic manastorm. Fortunately, the Institute’s arcane defenses held.

The staff of the Herald can personally attest to the frightening nature of what transpired, as our offices were flooded with a freezing Black Mist and

From this central focus at the Institute, the Black Mist spread out across all of Valoran. While the intensity of the necromantic effects was not observed to be necessarily greater than what is typical for Bilgewater during this event, its breadth of distribution is unprecedented.

and other high ranking officers in the Institute in the immediate aftermath of this event. From that meeting came an order signed by the High Councilor releasing all Summoners to their respective states to defend their homes.

“As High Councilor of the League of Legends, Vessaria Kolminye hereby releases from active duty the Summoner Corps, save such exceptions as may be designated by the Council.”

One can only imagine the nightmares that would cause such swift and decisive action. We can but hope that Harrows’ End will soon be here. League officials estimate an ethereal realignment will take place on November 24, triggering the resolution of the necromantic matrix underlying the Mist and ending this Harrowing at last.

A Harrowing without End?

November 24 has come and gone, but the Harrowing continues. Archsummoner Hadrick Secundus, widely considered the League’s foremost expert on divination, stated that this was more than the Harrowing lasting slightly longer than expected. Not only has the predicted ethereal realignment not taken place, but the currents of magical energy that bring the changing of the seasons seem to have been fundamentally distorted. Archsummoner Secundus confirmed that there is no reason to anticipate a natural end to this Harrowing at any time within mortal reckoning. He stressed, however, that Archsummoner Talik Lathner, whom the Council appointed to lead the defense of Bilgewater and general efforts to combat the Mists, is coordinating with mages from every member-state to seek out means of forcing an end to the Harrowing.

While we are cheered by this news, at least, the present situation remains bleak. The terrible blizzard kicked up from the Frostguard and the hordes of undead still claim the majority of the Valoranian landscape. High Councilor Kolminye acknowledged the seriousness of the situation in a most unusual Harrow’s End address. This speech, traditionally of a celebratory nature, took a much more severe tone this year.

“Never before has the Black Mist spread so far into Valoran. Never have we seen a Harrowing like that of 26 CLE. But we are resolved that we will weather this dreadful storm, this black winter, and prove once more that the magic that threatened to destroy our world during the Rune Wars can be turned to her protection.”

Most experts are now connecting this Harrowing with the arrival of The Ghoul, an ancient being from the Age of Divinity, associated with the Freljordian undead. The clash over the Guardian’s Sea nexus seems to have awoken the monstrosity, sending this Black Winter across the land.

Every region seems to have been affected by the Mist, though some have weathered it better than others. Bilgewater, with its experience with the Harrowing and the assistance of Noxian lunar cultists, was able to stave off the majority of the incursion, while Noxus itself has been inexplicably bypassed by the Mist.

High Councilor Kolminye’s order releasing Summoners back to their member-states has left the League with few resources with which to combat the Mist directly, but its remaining staff are combing the archives in search of solutions. While most Summoners have been relieved of their League obligations, a source within the Institute who wishes to remain nameless has reported to the Herald that High Councilor Kolminye has personally issued special field orders to certain members of the Summoner corps, including

This may be related to reports that

We certainly wish them well in these dangerous endeavors.

As of this date, we have compiled the following summaries of the situations prevailing in the League’s member states:

Representatives of these nations have gathered at the Institute of War, and it appears they may seek to form some sort of coalition and pool their resources for the sake of overcoming the Black Winter.

Delegates from the League’s member-states have emerged from closed-door deliberations regarding the Black Winter. It appears that while there was a general consensus that cooperation is necessary to overcome the Black Winter, they were unable to reach full agreement as to the means to be employed. Two strategies have thus far proven effective: the Demacian solution of banishing the undead, and the Ionian solution of calling upon ancestral spirits to restore balance between the mortal and ethereal realms.

The matter has therefore come before the League of Legends.

Leona, the Radiant Dawn has joined with the Demacian Lightbringers to purge the dingy undead and bring a bright morning.

Ionia has acquired the assistance of Syndra, the Dark Sovereign. The young sorceress’s unbelievable power may prove necessary as Ionia undertakes the massive task before it.

The staff of the Herald wish these Champions success on and off the Fields.

The Freljord was woefully unprepared for this Black Winter, hordes of undead have invaded Queen Ashe’s lands. Demacian troops made an appearance, but they didn’t account for the ice, blinding themselves from the refractions of their own light spells. Further, Demacians, saving one Meorah Spiritmight, have been unceremoniously ejected from Avarosan lands following their dishonorable and distrusting inquisitions into necromancy and the stalwart ally of the Avarosa, the Frostguard. Some suspect the Demacians were bribed by the Winter’s Claw to slander the reclusive clan.

Alone and without a Mothership, Bandle City turned to its long-time friend Ionia for assistance in driving back the Black Mist. However, tragedy struck at a cupcake-baking festival which had been called to boost morale among the yordles. Lord Maw, an undead bone-dragon whose Old Noxian name is often wryly translated as “Mr. Chompers” by veteran Summoners, swooped down from the sky and set upon the beleaguered yordles with terrible ferocity. Yordles in the midst of chomping down on an endless variety of frosted treats were suddenly made to bear witness to the winged monstrosity consuming no less than half a dozen of the finest cupcake bakers in all of yordledom. He was at last driven back by several Ionian Champions and Summoners, whose bravery we salute.

But this was not to be the sole tragedy faced by the yordles on this day. Akali, Champion of the League and the Kinkou Order’s “Fist of Shadow”, responded to a report that Veigar was performing an extraplanar summoning to bring Aklathos of the Abyss to devour Bandle City. She stopped his ritual just in time—only to learn that she had been most wickedly deceived. The portal she had sealed shut was in fact a rift to the fae realm, through which friendly fae spirits were coming to aid the yordles. Veigar explained with malicious glee that these fae creatures were the only beings with the power to interrupt his true scheme: a massive “event horizon” that encircled all of Bandle City. Though a renewed assault by Akali forced Veigar to flee through some unspecified magical means, the spell was cast. For two days, the yordles of Bandle City suffered under a profound psychic darkness, such that each yordle believed themself to be completely alone. Yordles, being a most sociable race, are known to suffer terribly under isolation, and it is indeed this very sort of torment that is believed to have warped Veigar into the dark sorceror that he has become.

The dread barrier was breached at last by Soraka, who called down a rain of starfire that broke through the spell-field. Yordles remained shaken, but Kennen and the yordles of the Ionian village of Nuigu raised their spirits somewhat by using the Great Signal Dish to briefly contact the Mothership. Although the Herald cannot vouch for the accuracy of these strange reports, it is said that the Mothership is currently “orbiting another sun”. Whatever the truth behind these rumors may be, hearing from the Mothership and her chosen crew seems to have done much for the morale of those yordles still here on Runeterra. A Storytime Celebration was proclaimed, with Kennen, the Nuigu yordles, and Soraka as guests of honor.