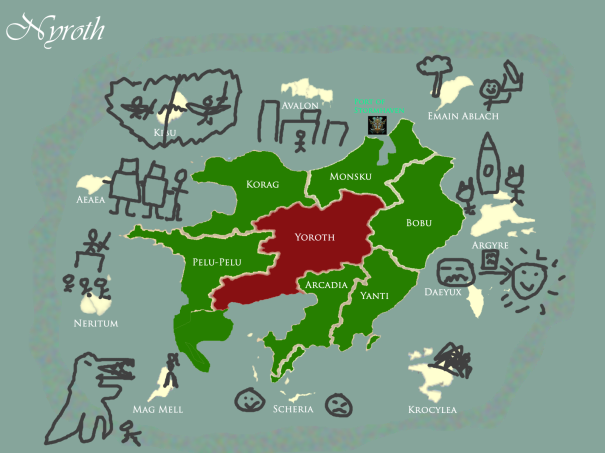 Though the core Factions experience is found in Factions matches, we also use interactive lore events to help immerse Summoners in the story. The Nyroth storyline is meant to focus on exploration and discovery, so we’re planning to bring in lots of lore events, mostly centering around island exploration.

Nyroth is surrounded by ten islands, each containing a nexus. Nyroth appears to be situated atop a leyline convergence, with these island nexuses channeling the wild energy of the magical storms in this region of the ocean inward to the center of Nyroth, where an enormous nexus is believed to be. It seems that, until the cataclysm triggered by Valoran’s Rune Wars, this configuration not only kept Nyroth safe but created a stable thaumic matrix allowing the creation of remarkable hextech inventions that would not otherwise be possible. The map above features crude annotations of each island, added by the ancient Nyrothian discovered by the Freljord.

The League quickly marked the islands off-limits. It is only now opening them up one by one, based on tournament results. (The victors of weekend Featured Matches unlock a new island.) Bilgewater has already explored Avalon.

Feel free to discuss options on the forum.

Below, I’ve linked the lore event pages for each of the four factions. The Shadow Isles and Bilgewater each went 2–1 this past weekend, and have unlocked an island each. Meanwhile, Ionia and the Freljord went 1–2, and have been given smaller mainland events.

Follow the links below to cast your votes. We’ll resolve them by Friday, before Research rolls.

The Shadow Isles is now exploring Daeyux. Once a land of potent healing magic, it has become a wasteland of undeath.

Bilgewater is moving on from Avalon to Emain Ablach, a neighboring island teeming with strange plant life.

The Freljord has been given permission to investigate the mysterious figures spotted around the outskirts of the Valoranian camp near Stormhaven.

Ionia is investigating an ancient library in the forests of Monsku.

One comment on “Adventure awaits! Vote in your faction’s lore event.”