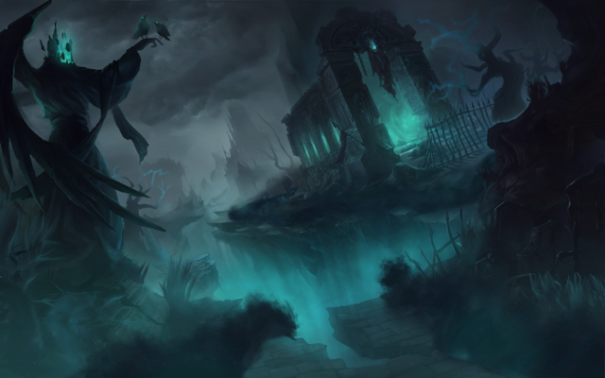 For weeks, rumors have been drifting along in the currents of conversation that fill the hallways of the Institute of War, telling of meetings between Councilor Kolminye and delegates from the Shadow Isles. Some speculate it could concern the Black Mist, but the growing consensus is that the Shadow Isles may be seeking to admit a new Champion to the League of Legends.

Today, a name has come forward: Kalista. The Council, together with a select set of Summoners from the prestigious Riotous Fists Clan, has announced a general session open to all Summoners and acolytes, at which they say they will address some of these rumors. They have confirmed receipt of a formal petition from the Shadow Isles concerning the vengeful spirit, but no Judgment has been conducted and no ruling has yet been made.

A Q&A concerning Kalista has been posted on the Boards. Join in!

Some have asked how Kalista’s arrival at the League will factor into the Nyroth dispute. We’ll have to look at the details of her lore once it’s published, but more likely than not she will be a Core Champion for the Isles. She will not in any event be auto-added to the Shadow Isles roster, but she will be available for pickup like any other unlockable Champion.