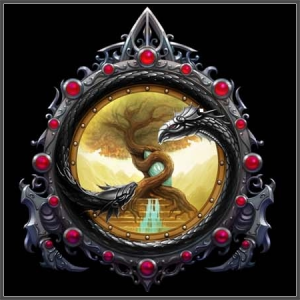 The scoreboard is updated. The revision period is complete. (Thanks, by the way, to the many people who caught errors and sent them in for revision.) We have now confirmed Ionia as the ultimate victor of this arc, by a margin of nearly 20 points.

The Nyroth story is not yet complete, and we’ll need at least one more round of lore events for each faction. Since the arc is over, it’ll be easier to make these more about meaningful story decisions and less about numbers.

What does Ionia get? 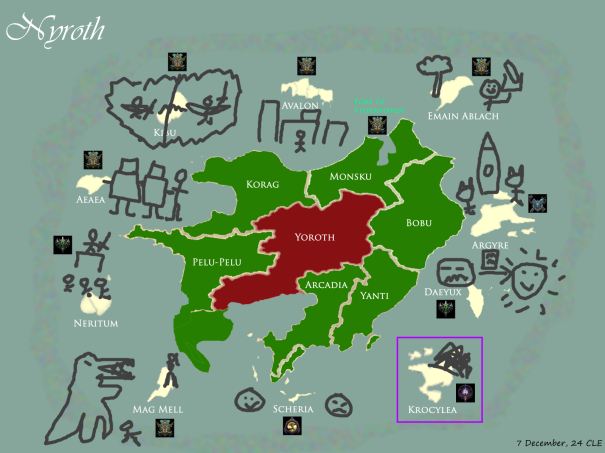 Ionia will be given authority over the Nyrothian mainland, with particular sway over the Yanti region, while Bilgewater will retain its role as Valoran’s emissary to Nyroth, particularly in matters of trade. There are various ways each faction could use this authority, and that will be a primary subject of the upcoming lore events.

First, we need to decide how the Freljord and Ionia will handle Yoroth. What they decide to do with the ruptured mega-nexus at the center of Yoroth will have serious repercussions for what this mainland ends up looking like. The basic options are likely to be:

What about the Shadow Isles?

We’re a little out of sequence here. One might say, more properly, that the story-time has not yet reached the end of the Nyroth dispute. We’re still in that critical period before the League edict comes down and resolves the dispute. In that time, the Isles have access to all of the mainland souls (outside of Yanti and Yoroth) of those Nyrothians killed in the cataclysm a thousand years ago. That will be the centerpiece of their lore event.

Stormhaven was obviously a disaster. Once we discovered, on the day of the resolution, that we had the troop counts wrong in the polls, we knew we were in for trouble. We then performed a manual recount, but that only raised further problems as we realized that our jerry-rigged Military system had some serious gaps. In such situations, one cannot help but treat one faction or the other unfairly: ad hoc rulings are inherently somewhat unfair, and as they’ve got to go against one side or the other, there’s not much to be done. Naggarok and I went back and forth at length to patch up these gaps, and we gave the Isles a second chance to vote in light of the new numbers.

What we’ll probably do is this. We’ll spin it as Karthus retaking control of the Isles from Aatrox, who will get eaten by a kraken during what should be a fairly awesome battle scene. We’ll have Gangplank using a thrown bottle of his own citrus-infused brand of rum to help a Summoner ignite a zombie. We’ll have Mr. Chompers the Bone Dragon lifting a Bilgewater galleon out of the sea and hurling it through Stormhaven. We’ll have Nami summoning a tidal wave to crash through the undead legions. We’ll have Aatrox taunting Jax while he fishes on the pier, then getting eaten by a kraken. The Summoners and Champions of the Isles will retake control from Aatrox, leaving their options open for the final lore event, and losses will be limited to those Nyrothian units that would have been “lost” at the end of the arc anyway.

Again, not a great solution, but our best attempt at damage control, and a striking (if costly) illustration of the importance of revising these World Systems.

I’ll probably be making a formal agenda GDoc and posting it up publicly in the near future, but here’s a previous.

Here are the most urgent tasks:

These are the main targets for Intermission, or at least the ones that occur to me off the top of my head.

There are also some things I’ve been really keen to do for a while.

Anyway, time for a little more holiday merriment, but I wanted to get an overview post together first.