Factions is running a Burning Tides tie-in event on 8–9 August, 25 CLE. This event continues the storyline between Miss Fortune and Gangplank, tying together their pre-retcon lore, the aftermath of the battle for Nyroth, and the latest Bilgewater lore from Riot. And of course, this being Factions, actual matches will determine the event’s outcome.

On Saturday, August 8, Miss Fortune and Gangplank will battle on the temporary Field of Justice established over the Butcher’s Bridge. The victor will secure control over the Slaughter Docks and the two nexuses located there.

On Sunday, August 9, the battle will continue upon Summoner’s Rift in Black Market Brawlers matches. With its figurehead governor deposed by Miss Fortune’s allies, Bilgewater lacks a representative to the League. The winner of these matches will be recognized as the new voice of Bilgewater before the Council—at least for now.

Matches will be streamed on twitch.tv/LeagueFactions, brought to you by the latest hexcast technology. Factions is always looking for new community casters and streamers, and if you’d like to toss your name in the hat, you can do so here.

All are welcome to join in on these matches, which will be held on the NA server. Teams will have a mix of ranks, but will mirror one another to keep it fair.

Have fun! YAR HAR HAR. You’re welcome to sign up for this tournament regardless of whether you’ve declared for a side in the current arc, Lines in the Sand.

Both Miss Fortune and Gangplank have long had ambitious plans for Bilgewater. An uneasy truce held for a time, as they combined forces with Nami in the battle for Nyroth, but that time has passed. The battle for Bilgewater has begun.

Mogron Pass during the Rune Wars.

In the dark days of the Rune Wars, Pirate Kings and Pirate Queens ruled the Blue Flame Islands. The Magelords and the Protectorate ravaged Valoran with runespells that tore Valoran’s leylines open to unleash the raw power within. Single spells sundered entire armies, ruined entire cities. Mountains buckled, rivers boiled. Shurima burned. The elementals and divine beings who had elevated humanity from its primitive origins all but perished, unable to survive in this broken, toxic world. Yet Bilgewater stood apart—no rune spell, however terrible, could pierce the arcane currents that churned the oceans around the Blue Flame Islands to reach the leylines in the seabed, and the rune mages were powerless upon the high seas. Bilgewater’s pirates could not take one single inch of Valoran, but on the high seas they were invincible.

The last Pirate Queen of Bilgewater perished at sea in 47 BLE. She had ruthlessly eliminated her rivals during her reign, and no one captain was positioned to take her place. Her fleet fractured, and the governor she had appointed to watch over Blue Flame Island refused to yield to any of her would-be successors. The tides turned against Bilgewater in 26 BLE, with the outbreak of the Fifth Rune War. Demacia and Noxus were far shrewder combatants than the Magelords and the Protectorate had been, alloying the brute force of rune magic with more flexible conventional methods. The scattered bands of the dead Pirate Queen’s fleet had been squabbling among each other for decades, and found themselves technologically outclassed and tactically outmatched by the well-ordered militaries of Demacia and Noxus.

A young Gangplank shortly before the founding of the League.

When the League of Legends was founded, Gangplank was an ambitious young pirate captain who had not so much pulled himself up by his bootstraps as walked over his father’s dead body to take the wheel of his ship. The drafters of the League’s charter insisted upon granting Bilgewater membership in the League, to keep Demacia and Noxus from going to war over the Blue Flame Islands. Agents of the Council had to scour Bilgewater to find even one Champion—Rob Blackblade, a swaggering adventurer who could see no further than his next caper. They had nearly as much trouble scrounging up a handful of mages who were fit to undertake the trials of Summoner training at the Institute, as Bilgewater had for centuries maintained a very sensible policy of putting a bullet between the eyes of anyone who so much as checked out a library book about rune magic.

Meanwhile, Gangplank got further good use out of the cutlass he’d struck into his father’s back all those years ago, turning one two-bit pirate captain after another into shark chum. He took full advantage of the fact that the League had neither the strength nor inclination to police the high seas, and matched wits and blades with Demacian and Noxian foes, including a clever young tactician with a limp and a pet bird. When his fleet was large enough, he took to raiding the Blue Flame Islands and Bilgewater itself. One such incident would later come back to haunt him, though he only vaguely recalled that particular Tuesday.

By 19 CLE, Gangplank was poised to become the first Pirate King since the Rune Wars. Yet he was not content to be a big fish in a small pond. Most pirates saw the founding of the League as a sign that Valoran was getting soft, and was ripe for greater plunder than ever before. But the way Gangplank saw it, the Summoners and Champions of the League were running the biggest racket on Runeterra, and he’d be damned to the depths if he sat idly by until the inevitable day that Bilgewater was pulled under by this new world order. So he left his simpering lackey of a governor in place and set sail for the Institute to become a Champion of the League. Bilgewater had been rather lacking in that department since Rob Blackblade resigned in 18 CLE, and was subsequently killed in the Harrowing Heist of 19 CLE.

Gangplank set about sizing up the leaders of Valoran, and applying his piratical cunning to the puzzle of how best to profit from circumventing the laws laid down by the League’s bureaucrats. He found it trivially simple to convince most of them that he was just another drunken backwater pirate, another Rob Blackblade, but with even less awareness of the bigger picture. He made a point of being arrested doing something stupid every so often, to create the profoundly mistaken impression that he didn’t know how to weave his way around the law.

A Champion’s innate magical energy can express itself in a variety of forms, including (apparently) the spontaneous creation of heart shapes in gun smoke.

A vengeful young bounty hunter by the name of Sarah Fortune followed Gangplank to the League. Not fooled by Gangplank’s charade, she was determined to uncover his schemes, and unite Bilgewater before Gangplank came back in force. She found an ally in Nami, the Marai Tidecaller. With the entrance of Graves and Fizz, Bilgewater was gathering together enough Champions that one could imagine it becoming a real force in the League—though most doubted that this forgotten backwater could manage it.

A map of Nyroth, annotated by the ancient Nyrothian rescued from True Ice by the Freljord.

The discovery of Nyroth in the wake of the Hextech Revolution was the opportunity Bilgewater’s more ambitious Champions were waiting for. Gangplank, Miss Fortune, and Nami combined their resources to get Bilgewater into the dispute, and they startled the great powers of Valoran with their performance on the Fields. Though Ionia ultimately prevailed in the battle for dominion over Nyroth’s mainland, Bilgewater secured the lucrative position of trade viceroy, and won the loyalty of many of Nyroth’s islands. The forging of a new moonstone and the return of the Marai and Atlanteans, combined with the wealth and knowledge that flowed from Nyroth, catalyzed the emergence of a much stronger Bilgewater. 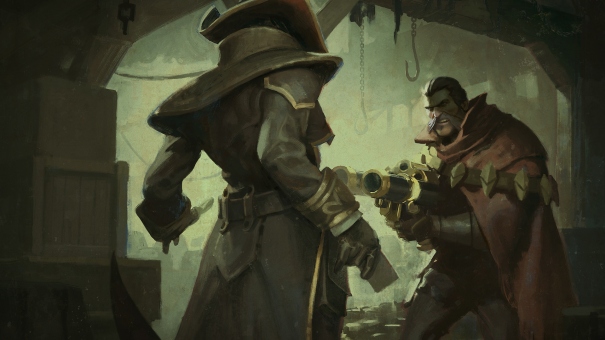 Gangplank saw that his years of planning were coming to fruition. He began the final preparations for his coup. But he found that Miss Fortune and Nami had gathered considerable sway back home, and those preparations proved more difficult than he anticipated. The rise of Shurima drew the League’s attention away, and—with the precedent set by the Dar’khos dispute—provided a way for him to accelerate his plans. He would call upon his Summoner allies to move the Council to recognize the Marai and the Atlanteans as separate member-states, as the Dar’khos partisans had demanded separate statehood in their counter-petition to Azir’s bid for member-state recognition. The petition would, of course, fail, not least because the Marai and the Atlanteans themselves would oppose it, but it would open the issue of Bilgewater’s representation. He would take his place as one of the rulers of Valoran, and turn all the power and influence that Miss Fortune had accumulated for her “united Bilgewater” to his own ends.

At his signal, Gangplank’s gangs hit the streets of Bilgewater. He toppled the governor and proclaimed himself the new Pirate King of Bilgewater. While most others in Bilgewater were focused on the domestic chaos, Miss Fortune realized that Gangplank’s biggest move was yet to come—he was going to cash in all that hard work at the Institute to become Bilgewater’s sole representative to the League.

Miss Fortune hastily concocted a plan. It began with hiring a certain Champion to steal a dagger…

The Battle for Bilgewater

With Gangplank dead, Miss Fortune saw her chance to “clean up” Bilgewater. She called in her Summoner associates from Nyroth and set them to the task of harnessing the power of the nexuses on either end of Butcher’s Bridge.

But Gangplank had survived. He made his first appearance at the Institute, where he repeated his claim to the title of Pirate King, and demanded recognition that he alone would speak for Bilgewater in the League. When Miss Fortune’s supporters tried to obstruct Gangplank’s petition, he ordered his fleet to open fire on Butcher’s Bridge. Miss Fortune quickly agreed to resolve their disagreement through the League, before there was nothing left to fight over. The Council constructed a temporary Field of Justice upon Butcher’s Bridge, and both sides assembled their Champions and Summoners for a battle to determine who would control the nexuses and the Slaughter Docks through which flowed the bounty of Nyroth.

Gangplank was not finished. He took a scorched and water-worn sheaf of parchment from his coat—the petition he had been prepared to file when Miss Fortune destroyed his ship and blasted him into the sea. He was the Pirate King of Bilgewater, and the deposed governor had gone “missing” after a conversation with certain “concerned citizens” sympathetic to Miss Fortune. He forced the Council to take up his petition for Marai and Atlantean membership in the League, which in turn compelled a response from “the representative of Bilgewater and the Blue Flame Islands”. Last he heard, Gangplank remarked, the governor was taking a “leave of absence”. He turned to Miss Fortune and loudly wondered if she might have some idea where he’d gotten off to. After she stiffly responded that she couldn’t say, Gangplank said that it was a good thing, then, that the Pirate King of Bilgewater was on hand. A second match was set for the ninth day of August, with the victor to be recognized as the “interim” representative of Bilgewater.

As always, comments and suggestions are most welcome. We take the community’s input very seriously.