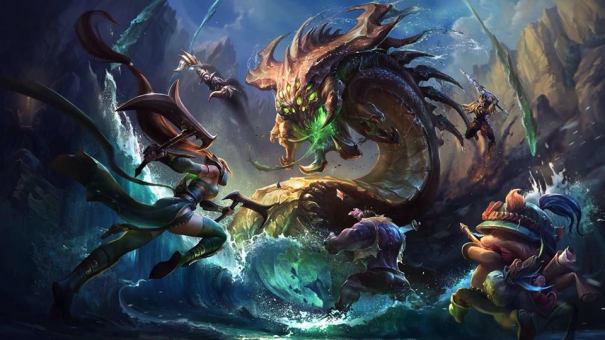 At the time, the Balance of Power standings were:

Bandle City completed its Might Quest in Week 10, and switches to Influence for Week 12.

Step I: “Yordle Traitors!”
After a few unfortunate events which produced the term ‘betrayordles’, many human civilizations have come to regard the fanatic Mothership-worshipping yordles as fickle, unreliable, and self-centered.

It drew the Nine of Swords, representing a Might challenge with a daunting Difficulty of 9. Unfortunately, this proved rather too much for the yordles to handle.

Bandle City has struggled with its “betrayordle” reputation. Relations with the Freljord have been particularly tense ever since Argyre. Despite their hesitant collaboration during the Divinity dispute, many Freljordians continue to harbor resentment toward the duplicitous litlte fluffballs.

When abyssal sea monsters attacked a Freljordian supply fleet, a squadron of yordle mini-subs found that they were the only nearby vessels. Their commander valiantly resolved that she would lend what aid she could, and ordered her subs to advance and open fire on the monsters to buy the Freljordians time to escape.

Though resolute at first, the yordles quickly flew into a panic when they found themselves encircled by the enormous monsters. They fired recklessly, and several of their poorly aimed torpedoes struck the Freljordian fleet instead.

In the end, both Bandle City and the Freljord took heavy losses. They would likely both have been obliterated had the Marai not arrived to fight the sea monsters off. The Freljord promptly demanded compensation from Bandle City, to Mayor Jadefellow’s outrage. Things are not looking good for Bandle City’s new PR campaign.

Step II: “Let Us Do You A Favor”
Perhaps the eeriest thing about the deals brokered by Icathian Summoners is that they so rarely ask for anything in return. To keep their sanity, those who accept Icathian aid generally try not to think too hard about what price they might be paying.

It drew the Six of Staves, signifying a Balance of Power check involving the League’s internal machinations:

A Piltovian inventor, Gerald Lumos, was on the verge of a major breakthrough in vivatronic amplifier design when he received a most distressing telegram from Kalner Industries, a Zaunite megacorporation. It instructed him to stand by for instructions from its acquisitions division, which would shortly be sending investigators to dismantle his lab and transfer his findings to Zaun. It further admonished that the destruction of any research data or prototype equipment would be construed as theft, and prosecuted as a criminal matter.

Icathia succeeded in its BoP check:

Dr. Lumos brought the news to the most world-wise and well-connected person he knew: a Summoner who saw the potential in Lumos’ work and had assisted him with some of the finer points of techmaturgical theory. She brought in a barrister friend of hers, who examined the situation. Marveling at the sinister genius of it all, she explained that, stitched together and cross-referenced in a way that Lumos himself never could have managed, the various loan financing documents he had signed to establish his laboratory created a means by which Kalner Industries could initiate a hostile takeover and liquidate his physical and intellectual assets at will. There was, she explained, no legal solution under Piltovian or Zaunite law.

That night, Dr. Lumos sat in his laboratory, a bottle of strong spirits in one hand and a hammer balanced in the other. His eyes roamed over his prototypes, painstakingly assembled and tuned over years of hard labor. We would ensure that any such acts would be prosecuted as a criminal matter. And just then, there was a rapping on the door. Standing on the other side was a woman with purple-tinged eyes.

The Icathian steadied the startled inventor by showing him her purple-and-gold Institute badge, a fine work of enchantment that had resisted decades of attempts at counterfeiting and never been successfully forged. She said that she had become aware of his plight, that she agreed with him that it was terribly unjust, and, with a smile, that she had a solution. Kalner Industries was an ambitious new corporation that was snatching up properties right and left. In its haste, it had become involved in certain disputes that touched upon the matter now before the League, concerning the Guardian’s Sea nexus. A single point of overlap existed with this acquisition, but that would be enough. A few clever amendments to the latest round of Icathian pleadings in the Divinity dispute, amendments which she assured him she could arrange, would complete the link. The acquisition of Lumos’ laboratory would be pulled into the hulking machinery of a major League dispute, wrenching apart the delicate sequence of carefully-timed legal actions that Kalner’s lawyers had arranged and rendering the entire acquisition effectively impossible.

There would be no price, she told him. She merely wished to support his scientific and technological endeavors, for the good of all Valoran. Of course, she added, were he to at some later date require her assistance again, she would welcome the opportunity.

By the next day, the Kalner acquisition of Lumos Laboratories was removed from the Piltover-Zaun Court of Mutual Commercial Pleas and elevated to the superior jurisdiction of the League of Legends.

By the next week, the acquisition proceedings were dismissed as moot, a crucial deadline having been missed because an overriding League motion precluded any pleading without the consent of a major party-disputant, Icathia, which Icathia had tersely withheld.

By two weeks later, Dr. Lumos had contacted his Icathian associates once more, to seek their help in the large-scale production of his vivatronic accelerators as personal defense weapons against necromantic entities.

And within the space of three weeks, nearly every major power in Valoran, including the League itself, was signing contracts with a frowning Piltovian man, while his Icathian associate sat beside him and, every so often, whispered into his ear.

Step III: “Who Watches the Watchers?”
Quietly, and almost invisibly, the League which defeated Icathia in the Void War has become a conduit by which Icathians and their alien gods control Valoran. 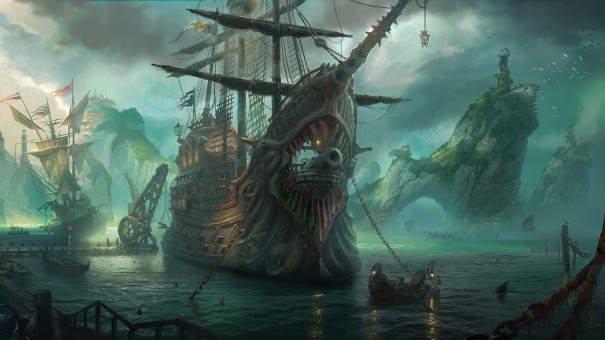 Having completed its Vision Quest in Week 10, Bilgewater moves on to Influence. It’s starting off at:

Step I: “Divided We Fall”
In a world of fanatical fascist regimes and mindless undead hordes, Bilgewater’s decentralization and internal dissent are serious liabilities. It’s hard to organize a successful defense with a culture that strongly believes a shipwrecked sailor doesn’t have to outswim the sharks if they can outswim their slowest mate.

They drew the Six of Cups, signifying an Influence challenge of Difficulty 6:

As the Harrowing approached, Bilgewater’s Summoners convinced the confederation’s leadership that they needed all hands on deck if they were going to survive the coming Black Mist, expected to be the worst in living memory. They resolved to approach the Atlanteans and convince them to commit their magic and resources to combating the Mist.

Nami arrived in Atlantis to an icy reception. The Atlanteans had not fared so well as the Marai, and were on the brink of extinction before the Lunari provided a new moonstone. Nami made her first major mis-step, or mis-swim, when she then offered to bring Diana to the table. “We were almost eradicated because the Lunari got caught up in some holy war and lost the Moonstones. You think that bringing Diana here is going to make us eager to swim out to meet the monsters so they can finish the job?!”

She turned to Fizz, and this went even less well. “He’s your Champion, not ours! He’s not fit to come before this assembly. He’s a low-born scoundrel who caused nothing but trouble, then ran off when we finally needed him!”

Nami might have salvaged the situation there, had Fizz not been particularly provoked by that last exchange and leapt into a brawl with his detractor. By the time everyone had been pried apart, it took a few smooth-talking Summoners to prevent Nami herself from being locked up in the local jail along with Fizz, and hours of argument about the intricacies of League law before they grudgingly opened his cell door.

It seems there’s still some work to be done here. 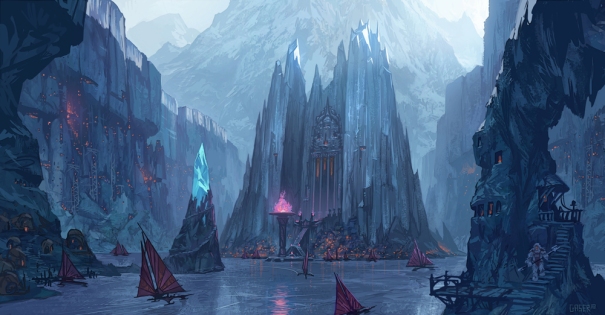 The Freljord is switching back to its Influence Quest this week. It drew the Ten of Swords, indicating an extremely difficult Might challenge. (What is it with high-difficulty Might challenges this week?)

On 1 August, 26 CLE, emissaries from Ionia and Bilgewater burst into the League’s general assembly with dire news: war in Nyroth. The northern and southern factions had cast aside Ionia’s carefully orchestrated peace and thrown themselves into another round of vicious civil war, as the civilization was only beginning to rebuild.

Demacia and Noxus were carefully watching one another in the leadup to the Harrowing, suspicious that their enemy would take the opportunity to launch an assault. Nor could they readily offer assistance without provoking accusations that they were trying to snatch Nyroth up for themselves. Neither nation had much of a reputation for a light touch when it came to foreign affairs.

To everyone’s surprise, it was the Freljord that offered assistance. Long the recipient of League aid, and having come to be viewed as something of a charity case, it seemed the Freljord was determined to change its image and begin acting like the great power it believed it could be. Agreements were signed, and the first ships left the shore in a matter of days.

Unfortunately, the Freljord had a somewhat mixed die roll, and despite its impressive Might of 9, failed to overcome this challenge:

The Freljordian troops that came to Nyroth to quell the civil war were substantially better organized and better equipped than those who had come to those shores two years previously. Initally, they met with a favorable reception: the people of Nyroth held great respect for the Freljordians who had helped re-align the central nexus and restore their land.

But while the Freljordian forces might have come in a number that only a great power could have matched, they lacked the discipline or subtlety of a veteran intervention force. The chaos of civil war soon had the Freljordian troops mixed up in an escalating conflict. As their patience dwindled, they began to fight more and more savagely, showing less concern for the damage done to Nyroth in the process of “helping” it.

Thankfully, Karma was able to bring the north and south to a truce. The damage done by the Freljord’s warriors did help motivate them to come to the table, but it would have been stretching the truth considerably to say that in the end the Freljord had made a good showing. However noble its intentions may have been, it had failed to show the discipline and efficiency expected of a true great power.

It therefore stays at:

Nice try, but not quite.