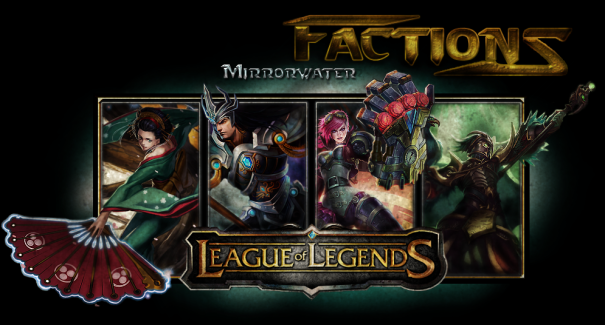 Tryndamere’s fist slammed against the table, “I won’t march into the Council arm in arm with a troll and this pigheaded woman!”

Sejuani gave him a sly smile and scratched Bristle behind the ears. She let his “pigheaded” pun hang in the air for a few seconds while Tryndamere glanced around grinning in anticipation of a chuckle. He didn’t get one, but the big boar purred a little and nudged Sejuani to scratch more.

When Sejuani spoke, she spoke with a sneer. “I don’t like much working with a bare-chested ‘king’ myself — but they say the mirrorwater holds great power. I want that power over here, not in Noxus.” She looked the King straight in the eye with placid calm and spoke bluntly. “It’s been too long since someone told Your Highness to shut up. You talk like a selfish old man who’s gotten used to being top bully and thinks he’s some kind of invincible warrior god. You know how the crowds mock you for charging heedless into battle. At their kindest, you’re a senile berserker of no use to anyone. And yet you claim the right to carry an entire nation along with you.” She tipped her head forward with a mocking tilt to the side. “Because you have a big sword.”

“Arrogant swine!” shouted Tryndamere. He began to shake, fingers clamping around the handle of his sword. “In the Freljord,” he growled, speaking in a halting, tense voice like a man holding a wild beast back with a chain, “such words CRY OUT FOR BLOOD!” He loosed his fury and charged at her, blade scraping a groove into the stone floor. Sejuani grabbed Bristle by the neck and swung him about to meet the charge with his tusks. Sejuani’s guards bravely rose to fight with her, even knowing they would be no use in a clash of Legends.

“ENOUGH!” Ashe rose and slapped her hands down on the table. His queen’s voice shook even Tryndamere, who stumbled and abruptly lost his frenzy as though doused with ice water. “You’re both witty and fearless.” She tapped her fingers into her palm in mock applause. “Well-done. We also all bear the right to rule, and I suggest we turn now to how we will exercise our powers. As a light diversion from the important business of pig puns and sarcasm.”

The room appeared duly chastised. Ashe continued. “We have a claim under the Northern Treaty and a few days in which to assert it or lose the right.” She paused. “Sejuani, who for the record is indeed an arrogant brat of a tribesgirl, is dead right. Like her, I will do anything, whether fighting in the League or politicking with the Council or telling my husband to put down his sword, to ensure that the mirrorwater does not go to a Noxian artificer to be turned into who knows what manner of arcane plague or earth-burning weapon. And our alliance with Demacia notwithstanding, they have their own interests. The Ionians I respect, but who’s to say what they’ll do tomorrow. Piltovians are mad gadgeteers who won’t do a thing to help us if Noxus attacks again.”

Trundle lifted himself from his seat. “Still got a ways to go on unifying the human tribes, eh? Well, ya can’t have my club.” He patted it against his leathery palm and remembered smashing the chieftain’s head into fractured bits of gore. “Heh heh heh. ‘Unifying club. Only been used once. NOT for sale for any amount of goatmeat, no matter how fresh, no matter if there’s poro filet on top.’ Ha heh heh.”

“ … just a troll joke. HA! It’ll be a pleasure smashin’ heads with ya, gracified lords and ladies and highnesses of queenery and kinglitude. Heh heh heh.”

Trundle yawned cavernously and turned to walk out. His guards followed. “Now I’m thinkin’ poro. Who wants poro? Doesn’t have to be poro if you guys don’t want poro, except I’m Troll King and unifier of the troll tribes and I say we’re eatin’ poro, and anyone who says otherwise gets unified right in the face. Ha.”

“Sometimes I wonder how this meeting went in Demacia,” Ashe muttered under her breath, face in her hands. “Alright. Get out, all of you. The King can stay. So I can have a word with his royal self in private.”

Ashe lifted her head and smiled wearily. “The Freljord will fight.”

THE FRELJORD has entered the Mirrorwater adjudication and will make its claim in combat on the Fields of Justice.

The following Champions have declared allegiance to the Freljord for these matches:

Ashe, the Frost Archer: Queen of the Freljord.

Gragas, the Rabble Rouser: Entered into an agreement with Ashe and Tryndamere that let him set up an operation to tap a pure water source in the Freljord for his brews. (See here.) Also, check out that Nordic beard.

Lissandra, the Ice Witch: I assure you I will find a way to put THE ICE WITCH on the Freljord roster.

Nunu, the Yeti Rider: Yeti-raised boy from the Freljord.

Olaf, the Berserker: From a far-off frozen land, with a close affinity for the ways of the Freljord. And he’s a freaking Viking.

Sejuani, the Winter’s Wrath: Tribal leader who hates the Kingdom of the Freljord and joined the League to oppose Ashe, but who recognizes that in this matter their interests align.

Trundle, the Troll King: Unifier of the troll tribes. He became king by flashing around a magic club. The mirrorwater is another arcane artifact that will prove his power.

Tryndamere, the Barbarian King: King of the Freljord.

Volibear, the Thunder’s Roar: Ursine chieftain and ally of the Kingdom of the Freljord.