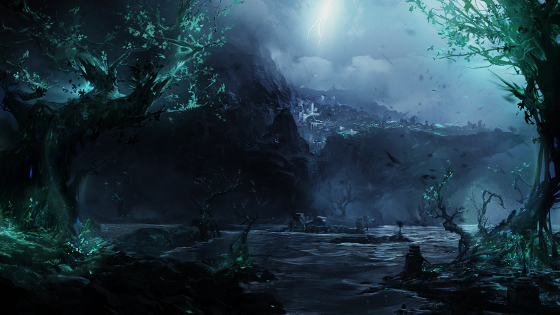 This is the Shadow Isles’ list of options for the November 23 “mega-poll”. To discuss these options and cast your votes, visit this thread on the Isles’ private forum. (If you aren’t registered for the forum, do so, and post in the “Join Your Faction’s Subforum” thread to get access to the SI subforum.)

The Shadow Isles placed third, and gets to split an island with the Freljord. (No vote needed: there’s only going to be one left.) 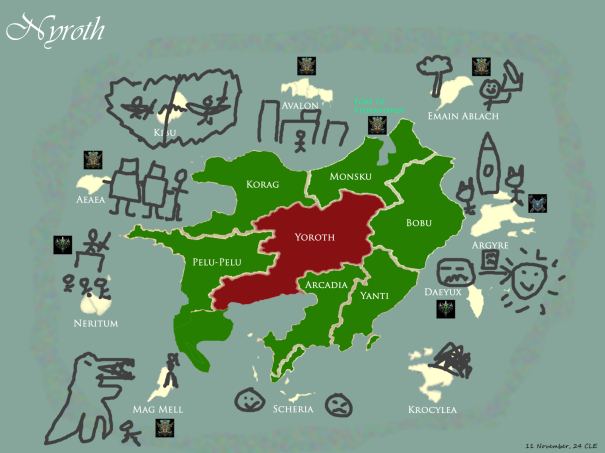 It’s readily apparent to anyone with some degree of magical sensitivity that Kibu is overcharged with wild magic, perhaps representing a sort of break in the network of nexuses and leylines that generates the veil and protects Nyroth from the ether-storms. It sounds like Kibu was fairly chaotic and unstable even before the cataclysm. Summoners report sensing extradimensional energies escaping from Kibu, but they do not detect the telltale signs of the Void.

The ancient Nyrothian’s scribbling was the source of much confusion, until the Valoranians consulted maps in the possession of the modern-day Nyrothians. It is sometimes the case that a piece of land will become flooded or erode away over time. Krocylea seems to have undergone the opposite change: the part scribbled out by the Nyrothian does not appear on older maps. It seems as though the cataclysm altered Krocyclea into a mirror-image of Argyre. Given that the magical energies of the nexuses are believed to have created Nyroth in the first place, this is perhaps not surprising, but why it should mirror Krocyclea in particular is unclear. Ancient records describe Krocylea as an independent kingdom with a fairly isolationist policy.

The Island of Scheria

Scheria is associated often with Yanti, and likewise seems to have been home to uncommon religious fervor. It is hard to glean much from the few scraps of records that remain, but the dominant religion seems to have been particular focused on balance and duality, such as between the sun and the moon. Many geometric and mathematical texts had origins in Scheria.

As discussed earlier, I’d like to propose that we remove Champion addition from the Politics system and implement a “flat” system that doesn’t rely so much on random chance. The system would work as follows:

In other words, we’d replace the die rolls with guaranteed Champion pickups. Since this would be a significant change, we wouldn’t implement it mid-arc unless all four factions agree. So, what do you think?

This weekend, the usual Featured Matches will be replaced with a special tournament that will tie up some loose ends from Hextech Revolution. Each of the Nyroth factions will get a vote as to which side it will support in this tournament.

With the tournament done, we’re fresh out of Champions, so we decided to try something a bit different for this weekend, November 29–30. The previous arc, Hextech Revolution, began as an arc about research and scientific innovation, catalyzed by the discovery of a Void-touched hextech energy source, the “pyrikhos” or “dark sand”, in Shurima. The situation spiraled out of control in the final weeks of the dispute, ending with an all-out battle between Demacia, Piltover, and Bandle City on one side and Noxus and Zaun on the other.

There is some unfinished business from Hextech Revolution, and we’d like to tie that up in true Factions style, on the Fields of Justice. There are a few objectives here:

And, of course, it’ll also just be a lot of fun.

With the help of Zaun’s mechanized HexKorps, the Noxian legions under Swain’s command broke the might of the Demacian military. Many of Demacia’s finest leaders were messily decapitated on the sands of Shurima, with the rest taken captive. The League had ordered that they be treated as prisoners of war until the Council has issued a ruling on Demacia’s attack on Zaun’s pyrikhos mines, but the Council is in deadlock despite the forceful arguments of both sides.

Noxus declares that these prisoners are war criminals who violated an active League peace edict to launch a sneak attack, in which many Zaunites (and Noxians) were killed. They reject as false Demacia’s claim that they had no choice. With nothing more substantial than an ocean spirit’s crazed ramblings to go on, Demacia had no right to take such drastic action. Jarvan III could have sought a cooperative solution with Zaun, or gone to the League. Instead, they unquestioningly accepted Ceruleana’s word not only that the Void energy in Zaun’s mines would open a Void rift and trigger an apocalypse, but that it would happen so quickly that there was no time for anything other than a brutal sneak attack. In response to the argument that Demacia has already been quite harshly punished, they add that Demacia’s military elite is also responsible for the destruction of the Noxian fleet in Shon-Xan, during which many Noxian civilians were killed. As with the attack on the mines, Demacia made no serious effort to call for a surrender beforehand—arrogantly certain of the righteousness of its actions, it launched straight into a murderous assault on their enemies and anyone caught in the crossfire. The Noxian representative pointedly added that these prisoners, unlike the men, women, and children on those ships, will receive proper notice from the High Command before they are put to death.

Demacia first counters that Noxus left it with no real choice when it filled its ships with both refugees and soldiers, then armed those ships with devastating weaponry that would have blasted the Ionian coastal cities to cinders. The Demacian representative objects that it is insulting to the dignity of the Council for Noxus to feign concern over civilian casualties, given the atrocities it committed in the first and second invasions of Ionia. As for the Battle of Shurima, an attempt at peaceful resolution was made, but Zaun opened fire on the messenger (Quinn) sent to deliver the ultimatum, and although she did in fact (at great personal risk) get it into Zaunite hands, Jinx “forgot” to deliver it. Once Zaun was tipped off, reinforcements were surely en route, and Demacia could not afford any further delay. As for a diplomatic solution, there simply was no time: Zaun’s greedy corporate bureaucracy would stall while it scurried about hiding its profits and crafting a cover-story to avoid blame, and Runeterra would be destroyed while they argued in a committee or a law court.

After months of circuitous legal argumentation and bureaucratic deadlock, the League has submitted the matter for adjudication upon the Fields.

If Demacia wins, the prisoners are to be released to their custody. This will bolster the strength of the Demacian military and significantly improve morale—with its king still imprisoned at the Institute, and its nation publicly shamed by League sanctions, Demacian spirits have been brought quite low. Frustration with the League is rising, as Demacians feel they are being punished for saving the world from annihilation, and suffering victor’s justice.

If Noxus wins, the prisoners will be interrogated by Zaunite PsiKorps operatives. They will then be tried by the High Command and sentenced appropriately. Most will be imprisoned for life, some will be publicly executed, and for a select few the High Command will split the difference by condemning them to the arena for howsoever long they may survive—more of a chance than the children on those transports got.

Zaun was victorious in the Shuriman dispute, and has gained control of most of the pyrikhos in Shurima. League surveyors have recently discovered new seams of dark sand, triggering rival claims by Piltover and Zaun. Whichever side wins will gain control of a valuable source of energy for the many remarkable inventions created during the Hextech Revolution.

How it will work

These factions will hit the Fields with their full rosters: perhaps 15+ Champions on each side.

The Nyroth factions will not directly participate, but will be allowed to signal their support for either side by vote. Their support will translate into bonuses for their favored factions, such as giving that faction a real ban. (To avoid an awkward ADCless situation, we’ll likely let the factions “protect” a couple Champions each.) If your favored faction wins, there will be some kind of kickback from the victorious faction.

Signups will be handled in Featured Match style, with teams made up of Summoners randomly selected from those who sign up. Summoners will be free to fight for any faction they choose to fight for—your oath only binds you with regard to Nyroth, not these other disputes. Regardless of whom your faction ends up supporting, you’re free to fight for whichever side you select.

Turns out there was a duplicate vote. The decision about Kaius’ gauntlet was actually tied between keeping it and giving it to Syndra. We decided we should hold a second vote on that.