The Summoner’s Herald: A Special Report Concerning The Strange New Land Discovered By The Yordles

A bulletin has begun circulating around the Institute of War today, as Summoners anxiously await the formal initiation of the next dispute before the League of Legends.

Our warmest greetings to the esteemed Summoners of the League of Legends and our general readership. We have arranged a special printing of this bulletin for immediate distribution. We eagerly continue our investigations into this matter, and shall report more fully as we are able.

—The Editors of The Summoner’s Herald

File hexgraph from the archives of the Journal of Justice, Vol. I, Issue 27, depicting Veigar’s attempted theft-by-balloon of the Mothership on 23 August, 21 CLE.

The Mystery Of The Mothership

For centuries, if not millennia, the Yordlefolk have revered their Mothership. The learned authors of the Encylopedia Piltovica inform us of two schools of thought concerning its origins. The dominant theory holds that yordles discovered the Mothership upon their prehistoric arrival in the area now known as Bandle City. Others assert that this “ship” itself brought the yordles to Runeterra long ago. Whether the yordles found the Mothership or it bore them to Runeterra from a now-forgotten first homeland, none can deny its central place in yordle society, or the uncanny bond yordles feel toward it.

The “repair” or “ready-making” of the Mothership has long occupied the attention of Bandle City’s best and brightest. (Heimerdinger is famously disinterested, which has become something of a scandal within the yordle community. Rumble cites it as proof that Heimerdinger is a “sellout” and “traitor” to yordlekind.) When the dark sand was discovered in Shurima, the latest theories asserted that the Mothership was in essence a kind of engine, the fuel for which was all but depleted.

Various proposals for refueling the Mothership had been entertained. Some called for extraordinarily expensive alchemical components, for which pious yordles eagerly procured funds. And yet none had achieved even the slightest experimental success. Critics of the “engine theory” called for a new direction in Mothership research, alleging that further fuel-based experimentation posed an unacceptable risk of damage to the sacred Mothership. Yet proponents of the engine theory persevered.

The dark sand would prove to be the key. A researcher known as Merricurry, now employed by a major Zaunite research consortium, sparked a hextech revolution (and a major League dispute) when she devised a functional techmaturgic theory for harnessing its power. Guided by Merricurry’s theories, the yordles were able to use the dark sand to concoct a replacement fuel source.

Thousands of years of yordle enterprise culminated in success when the Mothership, loaded with yordle star-sailors, ascended to the heavens on a column of magical light and landed on our moon. Bandle City burst into jubilant celebrations that lasted more than a week.

From this lofty vantage point on the moon’s surface, the yordles made a remarkable discovery: a new continent to the west of Valoran, lying within the most treacherous expanse of the Conqueror’s Sea. An illusion field encircling the continent appears to have concealed it from those few explorers who had dared to venture into these perilous waters, infested with enormous sea-bests and wracked by deadly thaumic storms. It is unknown if this spell-screen is natural or artificial in origin.

Though the new continent is visible from the moon’s surface, it is not discernible in detail by the naked eye. By use of a “prismographic telescope” of Piltovian design, the yordles have prepared a colorized image, which is printed below. This is Valoran’s first look at this alien land beyond our shores.

Today, the Institute of War announced the naming of this new continent, which shall henceforth be known as Nyroth.

Little is known of Nyroth thus far, other than that the area marked in red is radiating extremely high levels of thaumic energy. The spell-screen could be a sign of habitation by sophisticated civilizations, but it may also be a natural expression of the powerful geothaumic fields that make the Guardian’s Sea so infamously dangerous.

Cartographic analysts have remarked upon the unusually regular arrangement of the ten islands surrounding the mainland. This sort of geographical alignment is primarily associated with a convergence of powerful leylines, though such a phenomenon has never before been observed on such a massive scale. This does not seem consistent with the intense thaumic field located in the center of the mainland: as every Summoner who has completed at least Twentieth Level courses knows, a leyline generates a thaumagravitic pull which prevents the magic being channeled along it from radiating outward. (Many forbidden Rune Wars spells involved the violent extraction of such energy by rupturing these natural pathways.) This effect is dramatically amplified when leylines are linked together, enough to drain the local thaumic matrix entirely. In other words, networked leylines suck ambient magic into their circuit, creating a distinctive “dead zone” around them. If a leyline convergence is indeed running through Nyroth, then, how can such large quantities of magic be flooding the mainland? Why isn’t this magical energy being pulled into these (presumably gigantic) leylines? Is someone deliberately diverting energy from them? Why?

Perhaps the exploration of Nyroth will shed light on these questions. 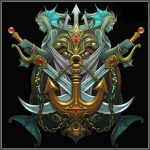 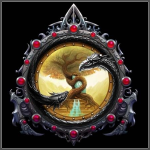 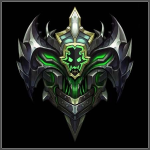 After reviewing petitions from nearly every nation in Valoran, each seeking the right to brave the storms and explore Nyroth, the Council has approved four such requests, rejecting all others. Bilgewater, Ionia, the Shadow Isles, and the Freljord shall soon compete on the Fields of Justice.

Sources close to the Council have informed us that the formal commencement of the dispute shall take place tonight. At that time, it is expected that greater detail concerning the terms of the adjudication will also be revealed. Analysts predict that the League will permit these nations to engage in at least limited exploration of designated areas within the next few weeks.

9 comments on “The Summoner’s Herald: A Special Report Concerning The Strange New Land Discovered By The Yordles”