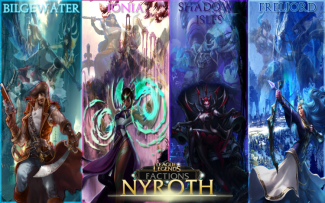 The first tournament for this arc, Nyroth, has been set. It will be taking place on the weekend of November 22-23. It is organized differently than an average weekend of featured matches, so we are going to have this weekend’s featured matches work as a practice weekend.

Teams will be pre-organized by players. Each team will have the skill tiers of HGGSB. (For the veterans who notice the change from the old DPGSB set up, we had to change the set up since we now combine Diamond and Plat into High tier.) The teams will be chosen by “captains.” Anyone can be a captain for their faction, they simply need to organize a team that fits the skill tiers, and all of the players are from their faction. Players can also sign up to play and will be put down on a list for the captains organizing teams so they can chose from players who are available.

Captains are going to be needed to organize these games. Anyone can become a captain for their faction’s team. Here is what the job of captain entails:

Any of the responsibilities above can be delegated to your co-captain (if you have one).

The Match Ups for this week are: Saturday, November 15 – Ionia vs Bilgewater; and Sunday, November 16 – Freljord vs Shadow Isles.

This week’s secondary prize for any faction that manages to go 3-0 in their featured matches will be +10 additional points added to their BoP score (losing faction would end up having 10 points subtracted from their BoP score).

Team Submissions – If you have a team assembled, submit it here.

Player Sign Ups – If you wish to play, but not to personally organize a team, sign up here so captains making the teams know you want to play.

Available Players – If you are a captain looking for players, here is a list of players who are willing and able to play this weekend.