Remember that allied factions are allowed to sign up for each other in featured matches. So feel free to help your allies while at the same time denying your enemies.

(Bandle City submarines discover a perpetual motion machine! Bilgewater disputes their claim on the basis that it may have been part of an ancient Nagakabouros temple. The two factions will decide whose claims are strongest on the Fields of Justice!) 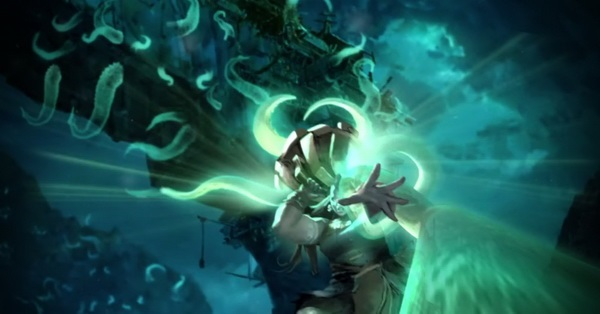 “SS4-Anchovy and the SS3-Cuttlefish are going to be conducting the extraction,” General Camellia explained. She met the eyes of both Yordle crews present. “Once you have the machine mounted on the subs, you are to return to Bandle Port. A smaller team of ships will deliver it the rest of the way to the capital via rivers. I don’t think I need to remind everyone how important this is.”

She turned to the crews. They barely fit in the dingy shack that constituted Bandle City’s Bilgewater land base.

Cami continued, “This is a machine that will never stop moving. If we can get this thing up and running, we might be looking at a Mothership that is never grounded.”

The eyes of the crews shone. Cami knew the feeling; scared, but inspired. She kept that feeling close, tight to her belly, but restrained. They had to focus on the mission. “Any questions?”

A captain’s comment was cut short by the door flinging open. A scarred man in a soggy trench coat and a tattered Summoner robe charged in, with several other pirates flanking him. “Sorry guppies, this operations’ shut down!”

“What is the meaning of this?” Cami spat, “We’re not doing anything illegal! This station is completely Institute approved!”

“Not anymore. Got a message from Illaoi ‘erself.”

He handed her a stained scroll. Cami unfurled it hastily.

Dear Yordles. Congratulations on your discovery of Nagakabouros’ ancient temple. Due to recent discovery of ceremonial material used only in the Rite of the Serpent, it is clear the site belongs to us, and so does the machine. It will make for a great beacon of hope during the Harrowing, and will adorn the halls of the Grand Temple being built in the port city. Thank you for helping us find it.  – Illaoi

Cami crumbled the paper and threw it down, stomping on it. She pointed a finger at the Bilge Summoner. “We found that machine! We claimed it in the name of the Mothership!”

The Summoner shrugged, smiling a jagged grin. “Looks like we claim it in the name of the Bearded Lady.”

“If you had any sort of scientific reasoning,” one of the crew’s head scientists chimed in, poison on her breath, “You’d know that the worship materials associated with the site are carbon dated to be centuries older than the machine itself.”

The Summoner scoffed, waving his gun at some of his comrades. They promptly snatched up the scientist and dumped her unceremoniously outside. Three more came for Camellia. She thrashed as they dragged her out, too. She could see all of their equipment being stripped out of the building as well.

“You are killing our hope!” one of the Yordles yelled.

“Hope? What about our hope, eh?” the Summoner replied, “That machine is going to fuel a Bearded Lady prayer so big, the spooks won’t bother us no more. I don’t want to have to evacuate my family because the dead won’t stay dead.”

Satisfied that all the Yordles had been cleared out of the building–along with most of their equipment, smashed on the pavement–the Bilgewater group turned to leave, chortling.

Cami growled, “The League will hear about THIS!”

Sunday, June 5 – the Freljord vs Icathia (the Void)

(Murder has struck the Institute! Two Summoners have been found dead, killed by forces unknown. As one had pledged to Icathia and the other to the Freljord, both factions will fight to decide which one gets to investigate it–neither trusting the other or the Institute to uncover the truth.) 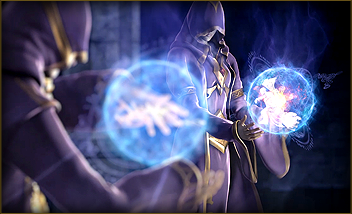 It was a quiet morning for Deej Eyertt; he had risen early and prepared himself for another exciting day teaching young Summoners. He couldn’t remember what season it was, but the flowers outside his office’s window looked lovely. He had always liked their shade of orange, but they were most peculiar for the numbing toxin that laced their petals: one of Nature’s many little traps. Had he added sugar to his tea already? He was about to take a sip and find out, when someone opened the door to his office without knocking. Deej arched an eyebrow in surprise.

“May I help you, Sam?” the elderly yordle asked the Summoner before him. He recognised him, a bright Piltovian lad that tended to get caught up in his friends’ zany schemes. Ah, to be young and energetic.

“There’s uh,” Sam started nervously, moving his hands as if they would summon the words he needed out of thin air, “there’s been a murder. Summoners. Uh, nearby. They told me you’d know who to tell.” Sam looked at him expectantly.

Deej smiled and nodded. He could see the lad visibly relaxing at the way the yordle unhurriedly left his tea on his desk and then casually fetched pen and paper from his desk drawer. “Dreadful business, murder,” he said calmly. “Particularly when Summoners are involved. Here, Sam, do me a favour and take a note for me…”

Several minutes later, Sam was rolling up the piece of paper and casting a warding spell on it. “Take that to Gloria Fairweather. You remember her, right? The senior Demacian that never smiles… not that many of them do,” he joked gently. Sam gave him a half-hearted smile. “You can trust her.”

Senior Summoner Fairweather had built a reputation for being as incorruptible as Demacian steel, Sam recalled, so it seemed wise to put her in charge of the investigation. Unfortunately, she took the news a lot worse than Deej had. Her demeanour went cold and severe, the way he had sometimes seen Garen on the Fields.

“Take me there,” she asked him, in a way that felt more like an order than a request.

The mansion was ostentatious in that way only a truly careless approach to money could buy, with gargoyles atop ornate ledges, stylishly carved columns flanking the main entrance and sculptures of both armoured warriors and robed mages all across the needlessly vast front garden. It felt like an eternity for Sam as he walked Fairweather to the front door. Two other Summoners guarded the entrance and eyed Fairweather warily.

“Hollow, forest, three, blue,” the senior Summoner recited impatiently. The two guards hesitated for a moment, then nodded and allowed her entrance.

Fairweather stopped in the main hall, with its grand staircase and immense crystal chandelier hanging from a skylight that took up most of the roof. Sam gulped as he saw the scorch marks on the polished wooden floor. He saw Fairweather’s eyes tracking every detail in the room, from the scorch marks to the scattered furniture in the next room, to the position of the two dead bodies on the staircase.

“Summoners Miriam DesChamps and Gregor LaRue. Noxians, old money, built a house on to neutral territory after Swain took over. No enemies that I know of, but Noxians always have enemies,” Fairweather began to speak as she carefully paced the grand hall. She was clasping her hands firmly behind her back. “Both decently skilled but nothing too spectacular. No formal position within the Institute beyond Summoner. A clean record, if memory does not fail me. Miriam declared for the Freljord, as expected. She claimed an affinity for Sejuani’s philosophy. Gregor surprised people by declaring for Icathia. Rumours always spring up when someone declares for Icathia, but nothing solid. Besides, Summoners can freely declare for any side during a dispute. But that never stops people from talking.” She turned towards Sam. “Call the other two in.”

Sam nodded and hurried to obey. Once the three Summoners were inside, she continued, “Kolminye already knows by now, but she will want a full report soon. I want you to bring me Hans Skyseer and Deej Eyertt, if we can combine their clairvoyance and temporal magics…”

There was a knock on the doors. Fairweather narrowed her eyes and gestured at the others to open them. On the other side there were two other Summoners, one with the Freljord’s colours, another with Icathia’s. “What is the meaning of this?” Fairweather asked them severely, her eyes cold. “This is a crime scene.”

The Freljord Summoner looked displeased, but gestured at the Icathian to proceed. His unnatural violet eyes glowed in the building’s penumbra. “Icathia and the Freljord have presented a joint motion to allow for this crime to be investigated by properly aligned Summoners, supported by appropriate consultants,” he stated, a hint of a hiss in every S.

“Impossible,” the senior Summoner declared categorically. “This is an in-house investigation. That motion will never pass.”

“Oh, but it already has,” the Icathian said with a many-toothed grin. “See, we found this resolution passed a couple of decades ago. There was an incident similar to this, and the Institute allowed Demacia to investigate a Summoner assassination. Precedent.”

Fairweather clenched her fists. “And you support this?” she asked the Freljordian.

“We’re not doing a joint investigation,” the Freljordian Summoner declared, her face unable to conceal her distaste for the man next to her. “We’re solving the jurisdiction on the Fields. But there’s no way we’re letting… these get their tendrils anywhere near the investigation. And that includes an in-house one.”

The silence between the Summoners was as tense as the peace between the Factions of Runeterra. “Call the Chronokeeper. We’re putting the whole mansion on stasis until this issue is resolved on the Fields.” She paused to glare at all five Summoners. “I trust there are no objections.”

The silence in the dead house spoke volumes.