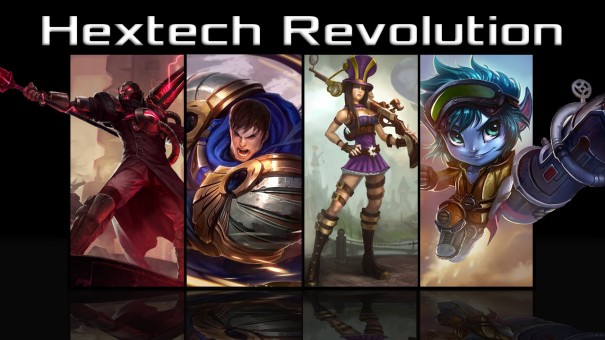 Thick smog obscured the distant stars and the meager sliver of moon. The grimy streets were lit instead by the complex’s glowing windows, as driven researchers toiled long into the night.

Four megacorp security guards in hexproofed brass armor vests rushed down the alley, each carrying a bulky repeating crossbow. One of their boots struck a discarded ThaumaKola bottle and sent it spinning aside to clink into the brickwork. They stopped at the end of the alley and looked either way down the street.

A furious voice from behind jolted them to attention. The words came in through the heavy distortion of a techmaturgic rebreather mask.

Summoner Naggarok held a hextech scanner in his hand. He slapped the back of his hand against the display, which was blinking a series of neon runes.

The guards stared in confusion. Finally, one of them inclined his head and dared to ask, “What was that, sir?”

Naggarok twisted a dial on his mask. A valve hissed as the multiple layers of filters repressurized.

“THRrrRikkRRIRILLSISsssssSS WMMMaRRrAY!” The adjustment had changed the nature of the distortion more than it had reduced it, but this time they seemed to understand. He was pointing at a ladder leading up out of the alley, to a nearby rooftop. They hastened to begin the climb.

Imbeciles! We must capture Vunkston IMMEDIATELY!

When they arrived at the rooftop, they saw the rogue Summoner Vunkston with his arms stretched up toward the heavens, wreathed in a torrent of green and purple light. The Void’s presence was unmistakable; the light turned and twisted according to an insane, impossible geometry utterly alien to this reality.

The latest batch of Pharmakon II had killed about a third of test subjects — a marked improvement over the previous tests. Vunkston had been one of the survivors, one of the new breed of psi-mages who could channel the Void’s power to warp reality itself to their will. The problem was that sometimes their will ended up just as warped. (Well, one of the problems. There were some exploded heads, too.)

Vunkston’s manic eyes flashed with reflected images of the Void, the terrifying dimension beyond this reality. The guards had begun to raise their crossbows, then stopped. Aiming a weapon at this man seemed somehow even more dangerous than not doing so.

His hands twisted around the arcane currents, gathering them for some kind of spell. The guards’ faces turned with revulsion as they saw his wrists, his elbows, his shoulders bend and twist in ways no living man’s bones should allow. Before their eyes, his index fingers split down the center; the two halves dripped thick ichor instead of blood as they warped into twitching tentacles.

The guards stared at Naggarok. He mimed firing a crossbow.

They seemed to understand the gesture, but had no sooner raised their crossbows to fire than Vunkston lashed out with his mutated hands and blasted them with arcs of purple lightning. They convulsed in mid-air, screaming as their bodies warped and bent, pulled across the crumpling fabric of reality.

As their mangled, half-liquified bodies sunk down onto the rooftop—and, charged with the Void’s energies as they were, also sunk partially into the rooftop—Vunkston widened his lunatic grin until his mouth split apart into Voidling-like mandibles that issued forth toxic foam as he “spoke”.

“Yooouuu… are nothing. This world is nothing. It is only a flimsy shadow on the surface of the infinite Void between dimensions.”

That crazed rant gave Naggarok just enough time to resolve any lingering doubts that Vunkston was due to be set on fire. He thrust a hand forward, fingers extended, then turned his palm up toward the sky. The spell-words cut through the mask’s distortion.

Vunkston burst into flames and fell to his knees, screaming. But while the man burned, the demons infesting his mind clawed their way to the fore. Unseen force seized his arm and thrust it forward until the bones snapped. Black and purple lightning shot down his arm and struck out at Naggarok, who deflected it with a swipe of his hand. It was time to put this monstrosity down.

Naggarok reached into his robe and drew out one of Viktor’s thaumic boltguns, a bulky weapon built for the cyborg soldiers of the HexKorps. It was said that a single explosive bolt could blow an armored knight into chunks of shrapnel and gore. He briefly considered the advantages of bringing a body back for study before determining, with a certain measure of scientific regret, that this was no longer a realistic objective.

He took aim and braced with both arms in preparation for the immense recoil. But as the flames guttered out, he sensed the flow of Void energy not fading but increasing. Very rapidly increasing. Surging.

Naggarok saw the rift beginning to form and arrived at two principal conclusions. First, that blowing Vunkston up was about to become thoroughly redundant and thereby unworthy of his valuable time. Second, that he had newer, more urgent priorities. Like getting off this rooftop now.

He only managed a single step backwards before Vunkston’s hands clawed through the veil of reality. The Void’s volatile energy flooded into the mutated psi-mage who had called it forth. He cackled, and glowed, and pulsed, and then … exploded.

The shockwave lifted Naggarok off his feet and hurled him across to the rooftop on the other side of the street. He rolled with the impact.

When he lifted his head, he looked across to the rooftop he had stood on moments ago. He found himself staring into a gaping dimensional rift. A portal to the Void.

A magnavox boomed down from a zeppelin flying above the burning city, addressing the panicked citizens of Zaun as they fled into the streets.

“Remain in your homes! We are receiving reports of a citywide gas leak. This substance could cause frightening hallucinations. We are assured that there is no risk so long as you remain inside your … I’M NOT READING THIS AGAIN! YOU KNOW THIS IS A BUNCH OF DREK! THERE’S NO GAS LEAK! THOSE ARE VOIDLINGS! THIS IS NOXUS TWO-POINT-OH! IT’S GAME OVER, MAN! IT’S GA-”

The magnavox cut out as his co-workers wrestled him to the deck of the zeppelin and clapped their hands over his mouth.

Zaun’s motley inhabitants gathered in pockets of resistance against the alien hordes. Street gangs armed with slugthrowers fought skittering Voidlings and more often than not ended up as lunch. Viktor’s tanks and robots held up better, but the HexKorps had not been designed with “minimizing collateral damage” as a key objective. Entire blocks collapsed into rubble, which was then bombarded with incendiary shells in the hopes of killing whatever monstrosities might be lurking in the debris.

As Zac and the Mutant Academy’s top students fought the Void demons spilling out of the portal atop the tower where Vunkston had met his abrupt and explosive end, Blitzcrank climbed the side of the tower bearing a bundle of potions hastily concocted by Singed and Viktor. A pair of Pharmakon-empowered psi-mages followed behind him, ready to match their wills against the chaotic energy of the Void and shut the portal in case the potions did not finish the job.

Blitzcrank clambered to the top of the tower. “SCANNING HEXFIELD. LOCKING TARGET. READYING CHEMICAL PAYLOAD ZERO-ZERO-ONE.” He whirled the bundle of potions over his head by its leather strap and flung it into the mouth of the portal.

The vials burst into a chemical cloud. The portal began to stretch and distort faster than the eye could follow, violently contracting and expanding a billion times in the space of a second.

The psi-mages leapt onto the rooftop. Hextech pumps hidden beneath their robes pushed fresh injections of Pharmakon II into their veins. They seized the thrashing portal with their minds and together began to force it shut.

The portal collapsed to a point and vanished with one last warble of distortion. Blitzcrank intercepted the blast before it could reach the mages. The steam golem’s head spun full circle, and he crashed down in a heap.

The portal was gone. The psi-mages moved to Blitzcrank’s side and attempted to rouse him with their magic, but it seemed more extensive repairs would be required.

One of them suddenly froze.

The other mage had only just opened his mouth to ask what she meant when he sensed it himself.

Both stared with horror at the same point in space as a new portal formed.

“BOW BEFORE THE VOID!”

He reached out to seize one of the mages with a tendril of Void energy. She intercepted it with a counter-current of Void magic.

This gave Malzahar pause. Oh, this mage was no match for his powers; had he wished it, he could easily have torn through her feeble defense and fed her to his pets. But this was most curious.

He turned his hand and curved his ethereal grasp around along a new path. The psi-mage followed, gritting her teeth and pushing both hands forward to redirect the counter-current. This mortal could control the Void!

Malzahar stopped his attack. A new prophecy was revealed to him, and he laughed with glee.

“Zaun’s time has not yet come!”

He drifted to the edge of the rooftop and looked down at the gathering crowds. The armies of Voidlings skittered along the streets and climbed up the tower, filing into the portal through which Malzahar had arrived and vanishing.

He descended toward the street, pointing to a Summoner he recognized, a son of the great Summoner Till of yore.

“YOU! Summoner! Come forth. I have business with the League … ”

Blitzcrank, the Steam Golem, is temporarily out of commission!
Zaun failed its recent Danger Level check. Per the Danger Level results table, it lost a random Champion for one set of Featured Matches. Blitzcrank was unavailable for the May 10 Featured Matches.
In lore terms, the disaster brought about by the failed roll was this Void invasion, and Blitzcrank was KO’d stopping it.

Malzahar, the Prophet of the Void, will fight for Zaun!
Zaun won the May 10 Featured Matches against Demacia despite their lack of Blitzcrank. As usual, they received a roll of the dice to determine whether their prize would be bonus points or a new Champion. They lucked out and rolled a new Champion. Zaun’s Summoners chose Malzahar.
Intrigued by Zaun’s new breed of Void-touched psi-mages, Malzahar has pledged his allegiance to Zaun for this dispute.
He will grant a +2 bonus to the Void Energy project.

Other art is principally Riot’s.

Next Update: The Endless Dead