by CupcakeTrap (edited by Montesque64)

Noxus has repelled the nightmare-hordes of the Void from its very walls. The demons have retreated to Icathia, now their stronghold.

Though all the nations of Valoran lent their might against the Void, Noxus bore the greatest cost. The Void’s contamination and the damage wrought by Noxian sorcerers’ desperate final banishment have poisoned vast swaths of Noxian territory. Almost one hundred thousand Noxian refugees have been forced to flee from their homes, seeking to settle in other lands. At the urging of the Council, most states have set aside at least a small parcel of unused land.

Ionia alone refused the refugees entry altogether, citing their suspicions regarding the threat of a renewed Noxian invasion. Noxus formally petitioned Ionia before the Council, to no avail. Furious, Noxus has challenged Ionia in the League, demanding the emergency annexation of the island of Shon-Xan. The High Command has deployed a fleet of warships to escort refugees across the sea to Shon-Xan. Ionia has mobilized in response.

As the League hastens to complete its opening deliberations and rituals, the Noxian refugee fleet and its military escort has engaged the Ionian navy. After a pitched battle, Noxus broke through the main force and came to the last lines of defense around the port of Shon-Xan. A few Noxian refugee ships have managed to make it to an adjacent shore, and those refugees have set up camp in the Ionian wilderness. Karma has held back the Ionian army pending League negotiations, but Ionian partisans have begun to strike at the refugee settlement.

Once again, so soon after the devastation of the Void invasion, war threatens to consume Runeterra. The Council has announced the opening of the Shon-Xan dispute, and will hear the petitions of Summoners and Champions of the League seeking to intervene on either side. 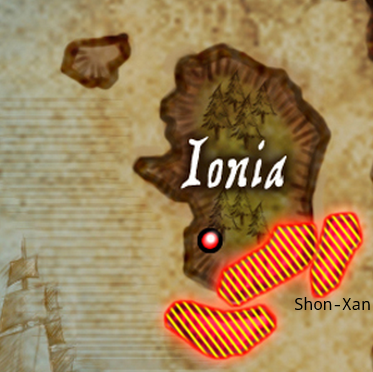