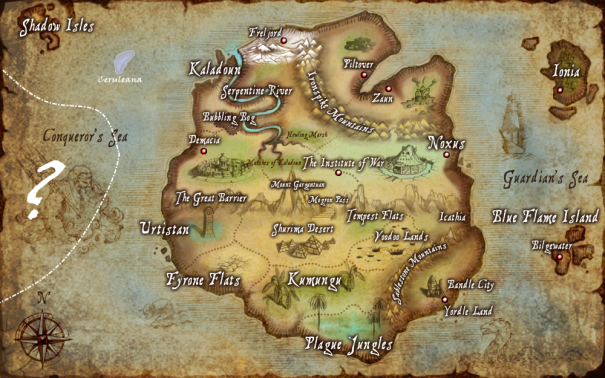 A map showing Valoran and the location of what is believed to be a new continent, obscured by a magical illusion.

The yordles of Bandle City have used the “dark sand” found in Shurima to refuel the Mothership and voyage to Runeterra’s moon. Looking down at the planet, they discovered something remarkable: a previously unknown continent not far beyond Valoran’s shores, ringed with islands. A magical distortion ran along its borders.

How had it not been discovered before? A League expedition braved encounters with the titanic beasts of the ocean depths and tumultuous storms to investigate this mystery. The Summoners on board reached out with their arcane senses and discovered an illusion screen fencing off the entire region, at least from any likely terrestrial vantage point.

The Council’s audience hall was soon filled with the clamor of delegates demanding authorization to explore this remarkable new territory and make contact with whatever peoples might there be found.

This matter will be adjudicated before the League of Legends. But first, it must be determined which factions will be permitted to press their claims on the Fields of Justice.

A fourth faction will be added by a vote among Zaunite Summoners. This is the traditional prize for winning an arc.

We hope to start the sixth arc in the next week or so.

The yet unnamed sixth Factions arc will begin in August. The first step is selecting which factions will be playable. We have decided that Bilgewater will get its debut in this maritime storyline. Next, we want to see which other factions the general League community most wants to see. You can vote below. After that, we’ll give Summoners from last arc’s victorious faction (Zaun) a private vote to add another faction, per Factions tradition.

Click here to go straight to the vote. Read on for more information about the factions that are available for selection.

See also: The Factions of Runeterra

This is an extremely condensed summary of the Factions of Runeterra page. For each faction, we provide:

Champion lists are somewhat subject to change. We might also, e.g., add in some “free agent” Champions which any faction has the potential to win.

Core and Secondary Champions are pictured. These are the Champions most likely to make an appearance for each faction. Note that starting rosters will likely be smaller, and that (judging from past arcs) bigger rosters are not necessarily stronger than smaller rosters.

Bilgewater is already in.

Bilgewater has already been set as a starting faction. It’s about time they had a chance to prove their mettle.

Remember to verify your vote by posting to the appropriate confirmation thread:

When you click “submit”, you’ll get a link that you can use to edit your responses. Save that link! Please don’t send in duplicate votes.

Certain Summoners will receive bonus reward votes, e.g. for recruiting friends to Factions in the previous arc or for running balance testing matches. I’ll contact those Summoners separately. They’re still entitled to vote normally; the reward vote will be added on top.

Thanks! I’m looking forward to seeing which factions will be in the next arc.