There have been six previous Factions storylines so far. 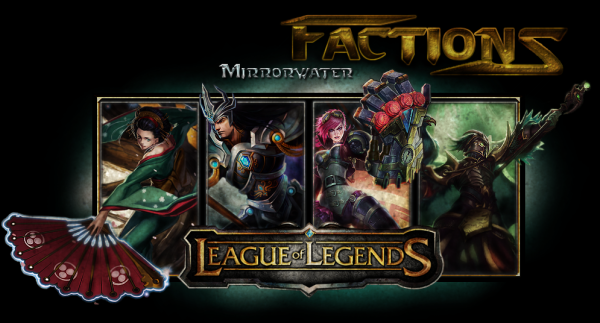 Participants: Demacia, Ionia, Noxus, Piltover, the Freljord
Victor: the Freljord
Setup: The nations of Runeterra fight for control of a powerful magical artifact, an eerie silver pool of “mirrorwater” found at a meteor’s crash site.
Outcome: The tribes of the Freljord won the Mirrorwater and took it back with them. The Avarosan used it to build a fortress, the Winter’s Claw fashioned it into weapons and armor, and the Frostguard (behind a cover story about Trundle’s trolls drinking it or somesuch) poured it into Lissandra’s underground ice pools to feed her world-changing magic.

Participants: Demacia, Ionia, Noxus, Piltover, the Freljord, the Shadow Isles
Victor: Demacia
Setup: Lissandra’s use of the Mirrorwater creates a mystical island of blue and silver ice in the ocean between the Shadow Isles and the Freljord. The Council decrees that ownership of this island will be decided in the League of Legends.
Outcome: Demacia wins control over the island and encounters its guardian spirit, an ocean goddess who takes the name “Ceruleana”. Demacia turns her power, and the island’s, to serve the forces of Order. Ionia warns them that every action has a reaction.

Participants: Bandle City, Demacia, Discord, Piltover
Victor: Discord
Setup: Through Ceruleana, Demacia had tipped the world’s balance toward Order, but that balance soon re-asserts itself. In Icathia, the fabric of reality tears open and the Void invades. The forces of the Void, backed by undead armies raised by the sorcerers of the Shadow Isles, rampage across Valoran. (Nice job breaking it, heroes.)
Outcome: Although the combined might of Runeterra managed to drive the Void back from Noxus, the Void now holds power over Icathia. Much Noxian territory has been corrupted with dark magics and is uninhabitable.

Participants: Noxus, Ionia
Victor: Ionia
Setup: The combined might of Runeterra stopped the Void onslaught at the gates of Noxus, but at great cost. Much Noxian land is now uninhabitable, poisoned by magic and haunted by demons from beyond. Over one hundred thousand Noxian refugees have fled their homes. The arrival of Noxian refugees in Ionia has sparked a new dispute in the League of Legends.
Outcome: Ionia ultimately prevails. The Noxian military is forced out of Shon-Xan. The battle-scarred grounds of the refugee settlement itself, poisoned by Zaunite bioweapons, remain Noxian territory after Swain’s ruthless strategems hold Ionia at bay just long enough for the final League peace edict to go into effect.

An Urgent Dispatch from the League!

Participants: Piltover, Bandle City, Zaun, Demacia
Victor: Zaun
Setup: The Void’s contamination spreads from Icathia into Shurima Desert, there combining with the lingering enchantments of the Shuriman ruins to create massive seams of pyrikhos, or “dark sand”. Pyrikhos proves to be a potent and versatile hextech energy source, allowing for the large-scale production of techmaturgic inventions. The factions of Valoran fight to control it.
Outcome: Zaun dominates the conflict, Viktor and Singed building a massive techmaturgic army (the HexKorps) of unprecedented destructive power. Ceruleana brings a dire prophecy to Demacia, warning that Zaun’s reckless exploitation of the pyrikhos has opened a Void rift inside its mines, and Runeterra itself may be destroyed. Demacia attacks the mines in violation of the League peace edict. A battle ensues, during which the Void rift opens. Demacia, Zaun, Noxus, Piltover, and Bandle City join forces to fight through the Void hordes and close the portal. Valoran is saved. King Jarvan III surrenders himself to the League, and he is imprisoned pending trial for Demacia’s illegal act of aggression.

Opener — Hextech Revolution
This sets the stage, introduces the factions, and explains what they’re each fighting for.

Interactive Lore Event I
Summoners from each faction decide on a new Champion for their rosters, and make some other important decisions.

Interactive Lore Event III
Piltover selects a new Champion after winning a round of Featured Matches.

Interactive Lore Event IV
Bandle City and Zaun have some decisions to make in the midst of the undead invasion.

Update 6 — A Desperate Alliance
Nefara’s undead legions attack Bandle City. The other factions band together to mount a defense.

Interactive Lore Event V — The Beginning of the End
The battle for control of the dark sand reaches an apex. Piltover and Bandle City consider an alliance, while Demacia must decide whether to respect League law and risk catastrophe or invade Zaun’s Shuriman mines and put a stop to their reckless actions.

Update 7 — A Scientist’s Decision
Merricurry comes to Zaun, and finds it a more frightening place than she anticipated.

Update 8 — Shield of Light
Demacia marches into Shurima at Ceruleana’s command to prevent a Void apocalypse, while Swain fights to put down Noxian rebels and regain control.

Update 9 — The HexKorps
Demacia attacks Zaun’s mines in Shurima, beginning the largest battle Valoran has seen since the Rune Wars.

The Summoner’s Herald Vol. I, Issue 2
An edition of the Herald covering the end of the League dispute and the battle in Shurima.

Update 10 — The Terror of the Void
Demacia, Zaun, and their allies join in a desperate bid to close a Void rift that threatens to destroy Runeterra.

Update 11 — Against Apocalypse
Viktor and Merricurry fight their way into the mines to close the Void rift.

Update 12 — Secrets of Shurima
The battle against the Void awakens ancient forces from a bygone age.

Epilogue
Zaun is victorious. A faction-by-faction overview of the aftermath.

Participants: Bilgewater, Ionia, the Freljord, the Shadow Isles
Victor: Ionia
Setup: A new continent, Nyroth, is discovered to the west of Valoran, in the heart of the most dangerous region of the Conqueror’s Sea, surrounded by an ethereal veil. Nyroth was formed by a leyline convergence, a network of ten nexuses pulled into a stable alignment by a central nexus of great power, giving rise to a mainland and ten islands. Once ruled by an advanced technological civilization, the aftershocks of Valoran’s early Rune Wars triggered a cataclysm over a thousand years ago, flooding the mainland with thaumatoxic energy and reducing its cities to rubble. (Valoranians prove immune to this effect, presumably due to generations of exposure to Rune Wars energy.) Holdout civilizations persist on the islands, and in a floating city above the mainland.
Outcome: Although a new Bilgewater led by Nami and strengthened by an alliance with the Marai and the Atlanteans held a dominant position for much of the dispute, and took control of most of the Nyrothian islands, Ionia struck back in the final weeks of matches and ultimately prevailed. The Freljord earned a place in history by using Frostguard magic (combined with Ionian astral magic) to restore the central nexus and render the mainland habitable once more. In the end, Bilgewater gained authority over Nyroth’s foreign affairs, while Ionia was given primary authority over the mainland itself, and many souls of slain Nyrothians flowed across the sea to the Shadow Isles.

Note: A significant part of Nyroth’s lore is still under revision. It remains dark and mysterious until that time.

Update 15: Neritum (Exploration by the Shadow Isles) [editing still underway]
The Shadow Isles does battle with Kaius, the Millennium-Tyrant of Neritum.

Update 20: Krocylea [incomplete]
I have some drafts written up, but for an event this important, I think there needs to be some more discussion first.
tl;dr: All four factions joined forces to defeat the Void. The Shadow Isles (under Aatrox) then turned on the others, intent on massacring the Krocyleans. Bilgewater fled. Ionia and the Freljord, together with the Krocyleans, very narrowly defeated the Isles, but took catastrophic losses in the process. They restored the nexus and everyone learned an important lesson about subjective truth and the evils of war.

Lore Event V [brief writeup only]
This covered the Battle of Stormhaven. I can’t seem to find a “proper” resolution.
Basically: there was an epic battle, and the less Aatrox-y elements of the Shadow Isles used the opportunity to regain control after Aatrox got himself eaten by a Kraken. Bilgewater successfully defended Stormhaven.

Informal Wrap-Up
A placeholder for some of the unfinished lore. Somethingsomething dark and mysterious.

The story now continues with Part VII: Lines in the Sand.