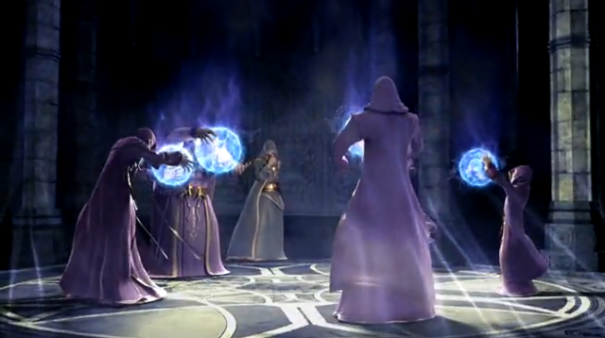 Hi all! We have quite a few new signups today, and as usual, the most common question is “so how do I get into a match?” I’d like to encourage everyone to take some time to help them out and start a few matches this evening.

If you’ve never started a match before, try taking a look at the Match Creation Guide. It’s really pretty simple: create a custom game, password “factions”, open up the faction-specific chats, invite people, shout something thematically appropriate (such as FOR IONIA! or BEHOLD THE MIGHT OF THE SHADOW ISLES!), and have fun. 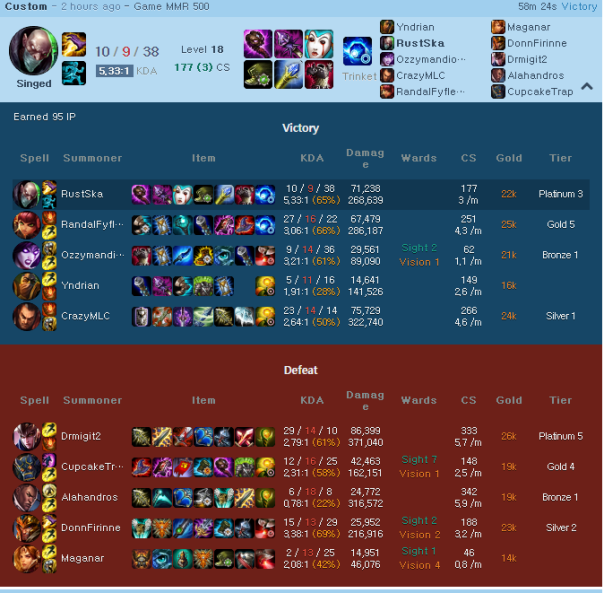 A screenshot from na.op.gg helps the scoring team quickly ascertain the rank-lists for each team. Taking 15 seconds to grab a screenshot can save them ten minutes or more of digging through other sites trying to look up each Summoner individually. It really, REALLY adds up over hundreds of matches.

Take an na.op.gg (preferred) or LoLKing (also acceptable) screenshot and upload it to imgur so that you can send in the results for scoring.

It’s generally good to try to make matches as balanced tier-wise as possible. That said, it’s not the worst thing in the world if it’s unbalanced, so long as both sides agree: the algorithms that run the scoreboard will automatically adjust the point value of the match according to the expected winrate for the match’s tier configuration. For example, if, based on tiers, an Ionian team is twice as likely to win as its Freljordian opponent, the match will be worth half points if Ionia (predictably) wins, and worth double points if Freljord (astonishingly) prevails. In other words: so long as you don’t mind a challenge, you’re not hurting your faction by going into a match you’re likely to lose.

If you prefer something more visual, FlashNFuse has created this handy video tutorial:

which shows the match creation process. To invite someone from a chat room, right-click their name in the chatroom’s player list and select “invite to game”. I suppose it’s also worth noting that the “invite powers” system is a little wonky; once you switch into a spectator slot, the ownership of the match transfers to a randomly chosen Summoner. The owner of the match can, at any time, click the little arrow next to someone’s name to give them invite powers, at least if they’re on their friends list.

Something else to keep in mind: so long as you aren’t playing against your own faction, you’re free to sub in any match you like. Obviously, “real” Summoners from that faction are preferred, but if Ionia needs another couple Summoners for its match against Bilgewater, there’s no problem with a pair of Freljordians joining in.

Finally, if you want to be really old school about it, you can open up the List of Summoners and copy-paste names from their into the “Invite” box. Obviously, this can be slow going, as there’s no easy way to tell if someone whose name you’re entering is even logged in.

If you’re a bit shy about creating a match yourself, or asking someone else to set one up, the best way to get into a match is to join your faction’s chat. People who are setting up matches often use these chats to quickly identify who’s on what faction and get the Summoners they need.

Each faction has its own chat. Join your faction’s chat to make it easier for match organizers to spot you.

The faction chats are:

You can set them to auto-join on login, as well: 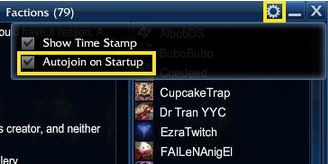 And remember, if the Factions chat is full, try Factions2.

Sometimes, people stress out about mixed-tier matches, or worry about letting their faction down. Please, relax! We’re all friends here. (Mostly.) If you’re feeling stressed, or think that someone on your team is having a rough time, try a few vaguely in-character jokes or chat messages. It often helps to lighten people’s moods and make the game more enjoyable.

In Case Someone Stops Having Fun

(In retrospect, that sounds rather more menacing and totalitarian than I’d intended. REPORT FAILURE TO HAVE FUN TO THE AUTHORITIES AT ONCE, SO THAT THEY MAY BE DULY CHASTISED.) 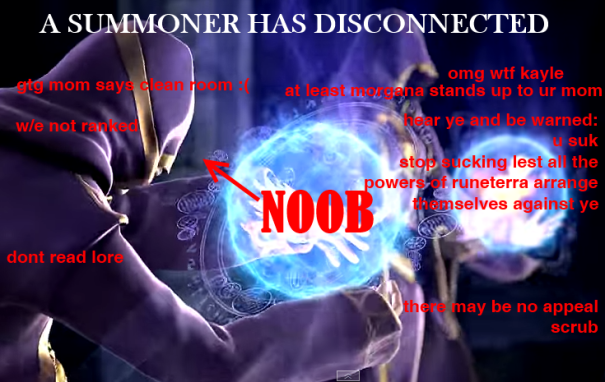 In the unfortunate event that someone acts like a total jerk, ragequits, or tries to murder every Summoner in the League with a biohex, please hit tab, ignore them, and report them after the match. A few “come on, chill out” attempts may be helpful, but be careful not to get sucked in. Definitely do not start posting in chat about how Xx420NoScopeNarutoxX was an awful rager and should be thrown out of Factions. It really, really doesn’t help: it just adds more fuel to the fire. Try to calm them down if you like, but if that fails, silently ignore them, reassure the targets of their rage that you’re not mad at them, report the rager, and move on.

Overall, I encourage people to focus more on staying positive and spreading happiness than punishing negativity. The latter is important, but the former is much more powerful.