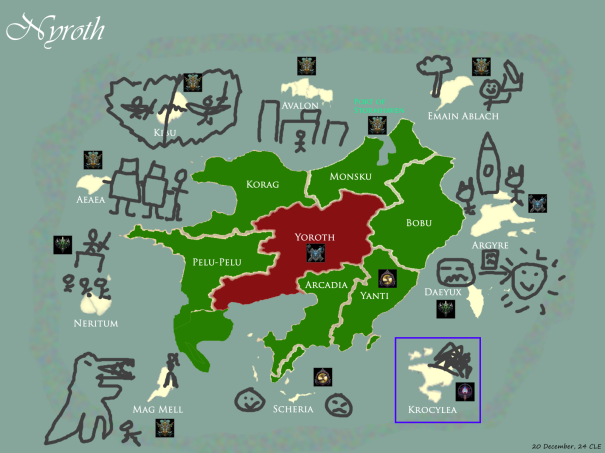 This is the third and final Nyroth Loresplosion, which is a cute name for “let’s slap something together and get this lore finished so we can move on”. Don’t expect masterpieces, especially from the exploration posts. You can think of them as “lore stubs”, quickie entries that summarize the basics of what happened and might later be expanded. (For example, I think you could have tons of fun writing Mag Mell from the perspective of a scout, adventurer, or Summoner.)

Update 20: Krocylea [incomplete]
I have some drafts written up, but for an event this important, I think there needs to be some more discussion first.
tl;dr: All four factions joined forces to defeat the Void. The Shadow Isles (under Aatrox) then turned on the others, intent on massacring the Krocyleans. Bilgewater fled. Ionia and the Freljord, together with the Krocyleans, very narrowly defeated the Isles, but took catastrophic losses in the process. They restored the nexus and everyone learned an important lesson about subjective truth and the evils of war.

Lore Event V [brief writeup only]
This covered the Battle of Stormhaven. I can’t seem to find a “proper” resolution.
Basically: there was an epic battle, and the less Aatrox-y elements of the Shadow Isles used the opportunity to regain control after Aatrox got himself eaten by a Kraken. Bilgewater successfully defended Stormhaven.

I will roll the dice to resolve Lore Event VI. There will be a final post-arc vote for each faction to set its path going forward (the “autopilot” or “AI” vote). An epilogue, along with more polished lore for many of these updates, will happen at some point.