There have been three weekends of Featured Matches so far, each centering around one of the three factions in this arc. This weekend, we’ll break from this rotation with a fierce melee of all against all, each faction fighting each other faction once per day on both days. These matches will be worth a base value of 15 points.

Matches will be streamed at twitch.tv/LeagueFactions.

The following schedule has been posted around the Institute, heralding a round of special matches. It is rumored that the Council is considering a motion to immediately recognize Shurima’s sovereignty and grant its petition to join the League as an independent nation—a crucial first step in Azir’s quest to restore the Empire to its former glory.

The resolution of Azir’s petition for League membership would also sweep away the stated rationale for the initial truce imposed by the League, bringing a resumption of hostilities on the ground in Shurima.

The Story So Far

The Shuriman Empire fell more than two thousand years ago. It had endured the Rune Wars, though the clash of the Magelords and the Protectorate scorched its once-fertile lands into a desert; centuries later, Azir’s hubris (and Xerath’s treachery) destroyed Shurima’s capital and Emperor in one terrible instant. The Shuriman Empire fractured into numerous feuding city-states and principalities. Perhaps perversely, this disaster bought Runeterra a period of peace—for many years, the remnants of the Empire sufficed to sate the appetites of the Rune Wars’ combatants. The continually redrawn territorial lines covering Shurima have prevented any serious attempt at unification under a sovereign ruler.

The founding of the League merely reinforced these divisions with an additional layer of governance in the form of a League protectorate. The Council frequently used Shurima as a geopolitical buffer, a repository of artifacts and minor territorial holdings that could be doled out to entice warring factions to make peace elsewhere. War came to Shurima during the dispute arising from the Hextech Revolution, and there has been occasional fighting in recent months as Piltover and Noxus hunt for artifacts unearthed by the shockwave resulting from the restoration of Nyroth. 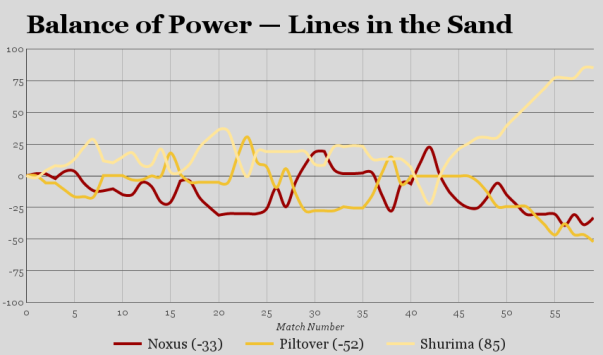 Given Shurima’s recent performance on the Fields, some believe it may be able to secure member-state recognition within the timeframe of the initial truce.

These matches will have a base value of 15 points, half-again as many as ordinary pick-up matches.

Except as otherwise noted, these matches will follow the standard tournament rules. We are continuing with the interim rule that Unranked Summoners (who held no rank in either Season 3 or Season 4, and are unranked in the current season) are treated as Gold.